The Region 7 AAAAA Championship will be held in soaked Boling Park on Wednesday afternoon. Unfortunately, all the major races this year at Boling have been held in very wet conditions which have slowed down its usually quick times. For the Cherokee County Championships, at one section in the back part of Boling, the runners ran through about 40 meters of water and mud. With three consecutive days of rain, the conditions will be sloppy yet again. 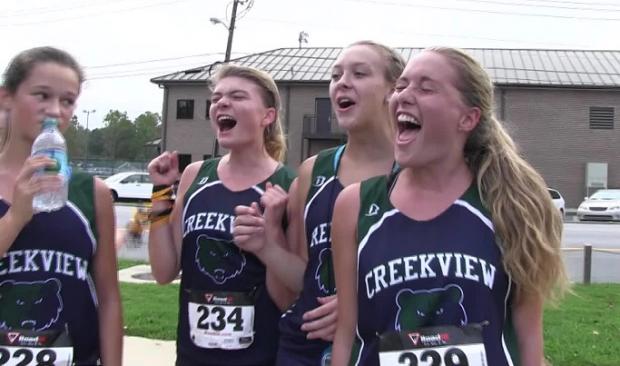 Last year, the Creekview girls ran away with the title and this year seems no different. Lead by senior Lauren Wallin, this year's fourth ranked Grizzlies could see the top 5 girls finish in the top 15 places and win their second straight region crown. The teams claiming the next three spots is a huge unknown. Legitimately, there are seven teams with a chance at claiming a state position.

The team with the most talent and depth is probably 9th ranked Cambridge, but they have struggled to make gains over last year's strong second place region finish. They are led by the sophomore Chloe's (Phelps and Paskins) and newcomer Clarissa Beck. The hottest mover of the bunch is watch list Forsyth Central (11th place last year). Central comes in led by senior Bonnie McKinnon, who will be looking for a top 5 finish. However, the rapid improvement junior Ashley Malone and the appearance of senior Shana McLochlin will make them competitive.

Rome has a tight pack of quality runners led by senior Isabella Schlitz, if they can run together and stay with some of the top teams, they will place well and possibly move on. Watch list Woodland has two possible all-region runners in Lindsay Scifers and Cheyenne Spinks. For them, it will come to whether or not their 3-5 runners have a good day. Similarly, watch list Riverwood has the best combo runners in the region in Anna Hayden and Elizabeth Graves. Both possible region individual winners (along with Kell's Olivia Terwilliger) will most certainly be heading to Carrollton. It simply depends on whether the rest of their team wishes to join them by having a very good race on Wednesday. If 3-5 have great runs, then they can certainly punch their tickets to state.

The two dark horses in the region are probably Sequoyah and North Atlanta. North Atlanta had a very solid race this year at the Rock, being nipped by host school Woodland by a single point. Good races by their two front runners, Glenda Tutt and Kate Breeden, could allow their 3-5 to battle it out with schools like Woodland and Riverwood for that final spot. Sequoyah has the talent in their top 5 runners to compete, but so far this season, they have not been able to put it all together in a single race. Similar to Rome, they will need a team effort to get all five in a position to cash a ticket to Carrollton. In the end, this race is not about who finishes in the Top 10, but instead which teams can inspire their second pack of runners into the run of their lives. The race is wide open and the conditions will be sub-par. It is all about who has the mental toughness to overcome the environment and pre-notioned limits and have the run of their lives.

Similar to the girls race, the boys have a dominate team that look to run away with the title. 2nd ranked Forsyth Central has run well all season long. Especially with the poor conditions, they may even decide to rest a runner or two with an eye towards winning a state title. The senior laden Central currently has 6 of the 10 fastest times in Region 7 this year with senior Will Hasse looking for a region win.

Fighting for the second slot, third ranked Cambridge has been quickly moving up the charts. Bjorn Leicher will look to win the region, while teammates KJ Hirschi and Zach Moragn will attempt to break up the Central pack and finish in the top 10. However, Cambridge's weakness is their final two scorers and will need a few good runs by their second tier. Eighth ranked Creekview will also battle for runner up title. Zac Cantrell will contend for a region title, but Creekview's next group of runners has some talent to really move into the Top 15. If they can do so, then they will easily punch a ticket to state.

Watch list Dalton will try to hold off the other competitors for the final spot to state. A very young Dalton may have only one senior, Moises Ponce, on in their region lineup. Their biggest key will be to see if one their final three runners can break into the top 40. If so, they will be hard to upset. However, like the girl's side, both Sequoyah and North Atlanta will be the dark horses in the fight for a state spot.

For Sequoyah, it will take a team effort of solid runs to put them in contention. They have a three pack of runners that could all break the top 20 in Braeden Kelly, Dalton Trampnau, and Josh Meyers. For North Atlanta, Jackson Pierce is their front runner and will contend for the region win. It is all about how their next set of runners finish. If they place a few more runners in the Top 30, they could be looking at a birth in Carrollton.