With a break from the XC Gods, the rain magically stopped before racing began and basically held off until the Awards, as 15 schools 300 MS athletes splished & splashed their way around the ACS course Saturday morning with Lovinggood's Girls & Malcom Bridge's Boys sloshing their way to the team titles. Brian Pelland of the Alpha Crush & Grace Ellsworth of Lovinggood hydro-planed to the Overall wins.

Boys Race The Boys race was one of strategy as a few of the top area kids may have gotten their first taste of racing against some Metro boys. Brian Pelland of the 'Alpha Crush' bided his time behind frontrunner Jaime Jacoby from GWA and picked his spot overtaking Jacoby pulling away a bit for the Overall win in 10:34. Jaime held on to 2nd though posting a 10:42 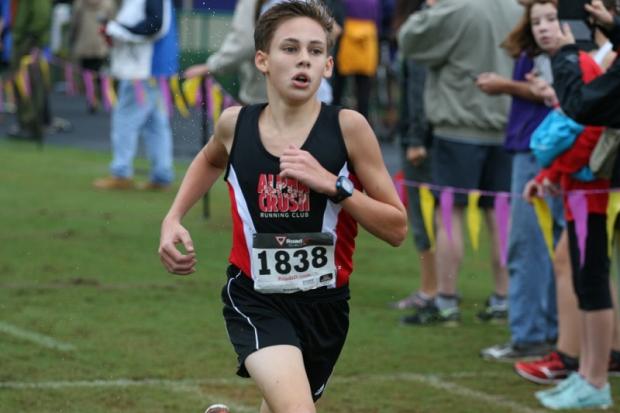 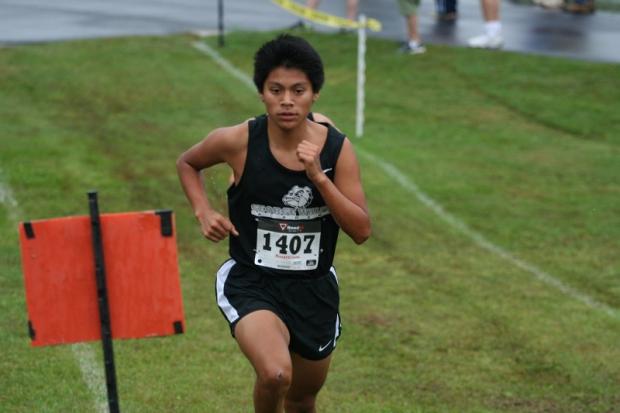 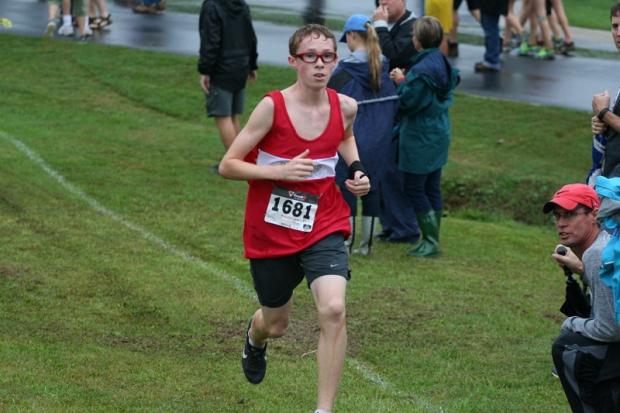 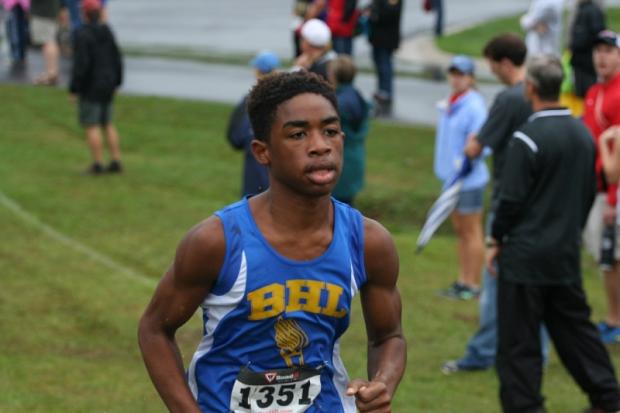 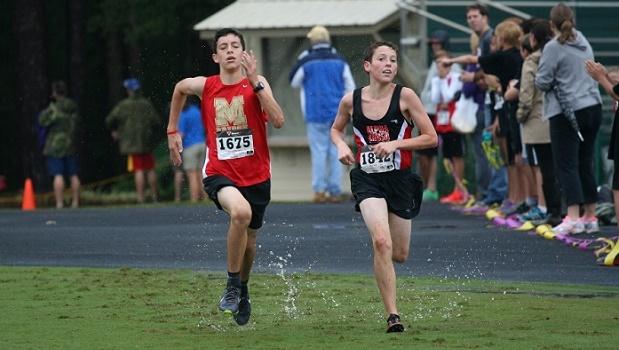 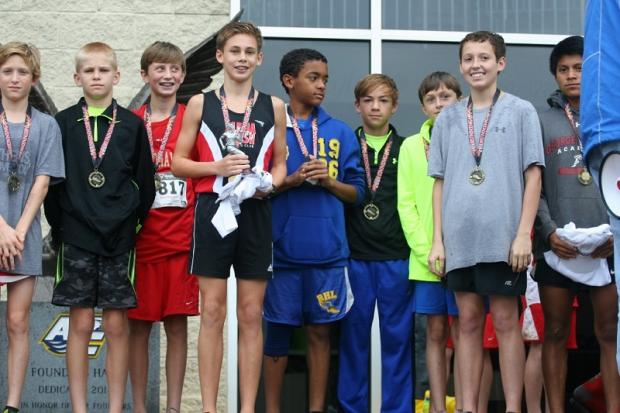 Posing here are most of the MS Champ Boys Top Medalists 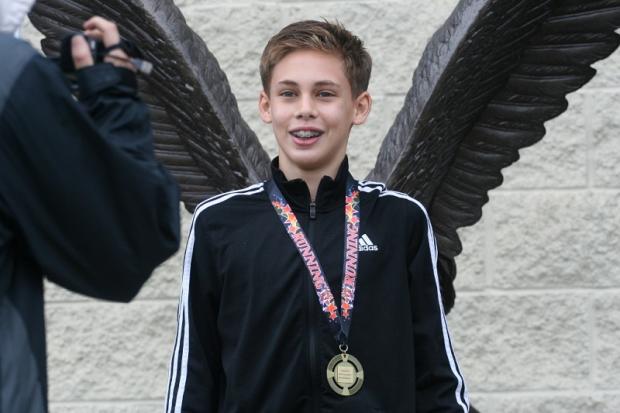 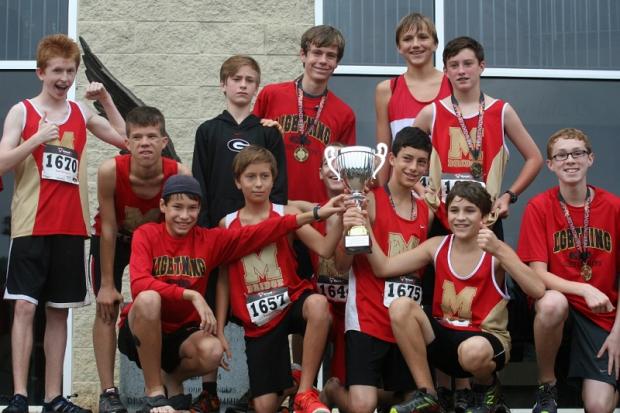 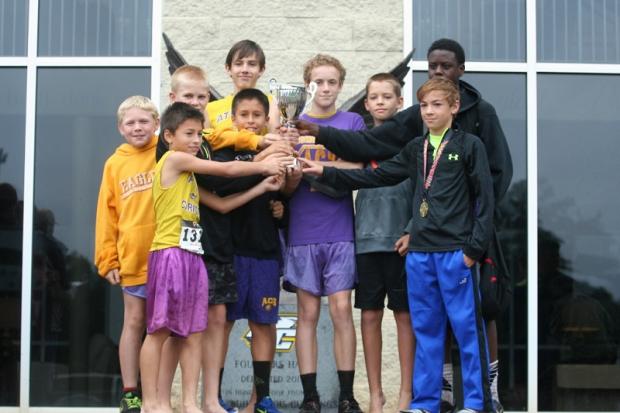 Girls Race- The Lovinggood MS Hawks had a nice battle with Malcom Bridge, but were just too fast on the wet surface for the Bolts, winning the team title by 15 points. Grace Ellsworth battled with Faith Bobak nearly the entire race before pulling away in the 2nd loop to a convincing win at 11:46. Chipping in for the Hawks was Sierra Wehrenberg in 3rd Overall at 12:05 and Royal Delay in 7th place.

Faith Bobak had the opportunity to check out the course in near perfect condition Friday, but dealt well enough with the soggy course, taking Runnerup honors in 11:58. Malcom Bridge placed 2 girls in the top 5 for the 2nd place Cup led by 7th grader Kelsey Morse in 4th place at 12:06 followed by Caroline Duncan in 5th at 12:34. 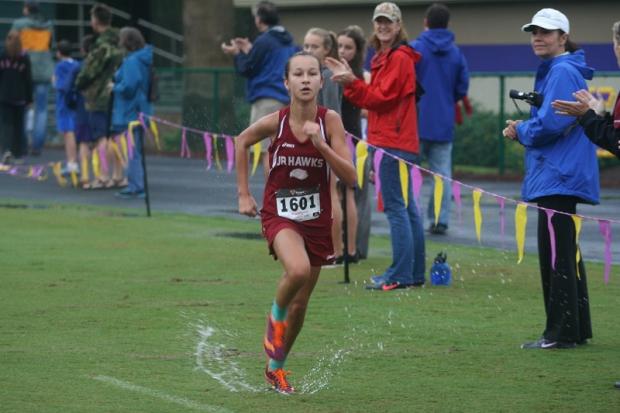 Grace Ellsworth held off a race long challenge, pulling away the final 800m for the Girls Overall win. 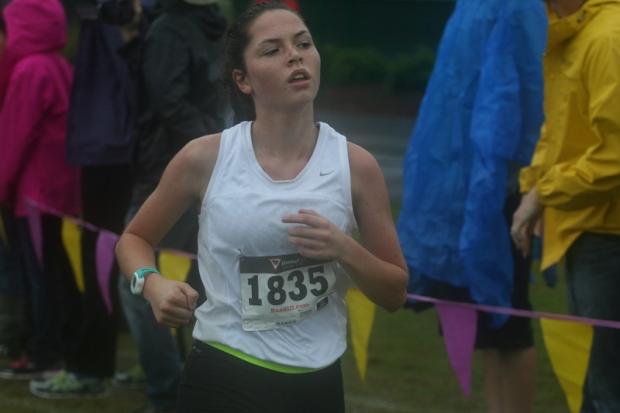 Faith Bobak came down from Ellijay and placed 2nd Overall in the Championship race. 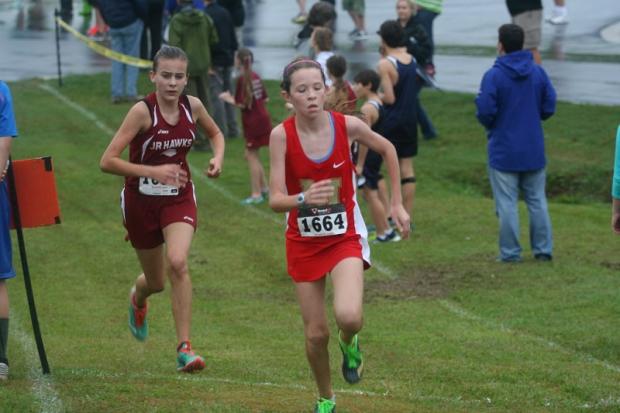 These 2 gals had a duel of their own nearly the entire race with Lovinggood's Sierra Wehrenberg (L) outlasting Malcom Bridge's Kelsey Morse for 3rd place. 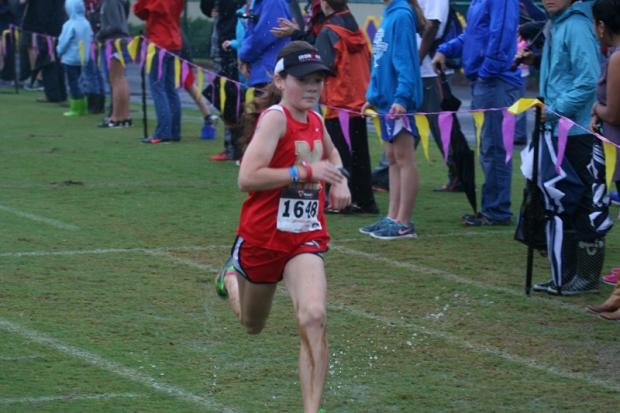 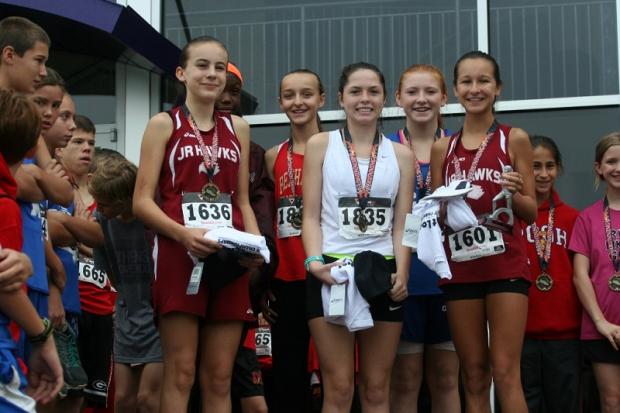 Here are the top 5 Girls with Medals and super cool Foot Locker Gear! 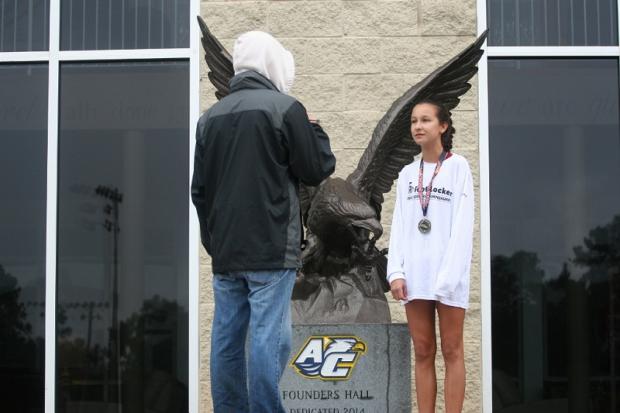 Grace Ellsworth could not escape our video interviewer just before leaving the venue. 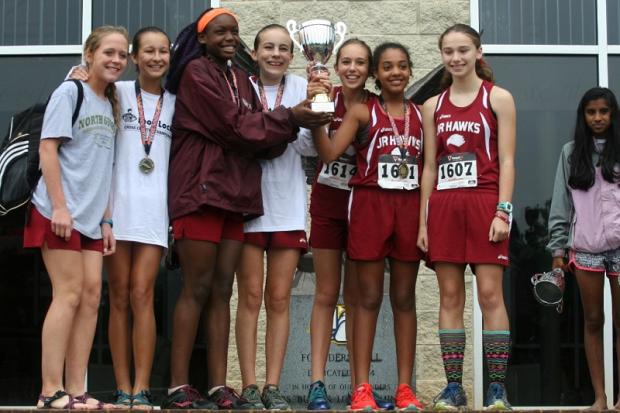 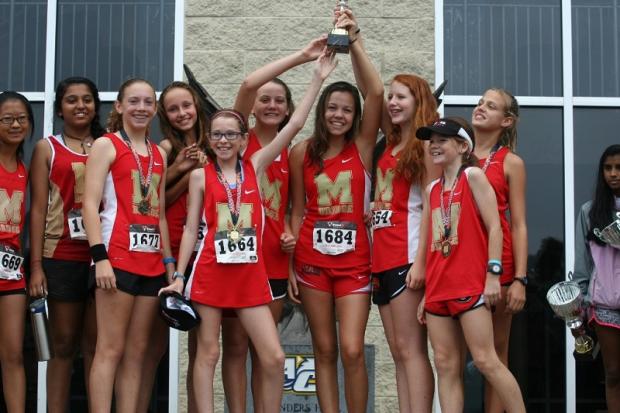 Malcom Bridge was all smiles capturing 2nd as a team.

JV Races- There was no 'official' team scoring in the larger JV races, as Jefferson Parks' (3rd grader?) Sidney Jackson took 1st in the Girls JV race in 14:10 with Lovinggood's Ava Brooks 2nd (14:24) Claire McNulty from George Walton was 3rd in 14:31.

Riverside Military went to Athens Academy by mistake, but made it to ACS for the JV Boys race, as Drew Stubbs took 1st Overall clocking a 12:28. Long Cane's bus broke down on the way, but 7 athletes managed to make it over to ACS anyway, including 6th grader Colton Esposito who was runnerup in 12:56. Clarke's Jace Porter-Sims placed 3rd a stride back in 12:57. 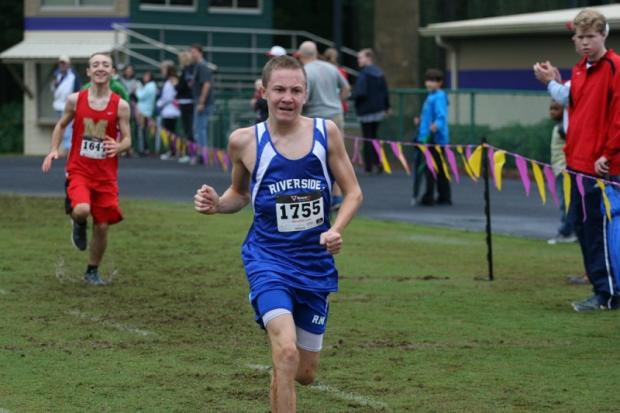 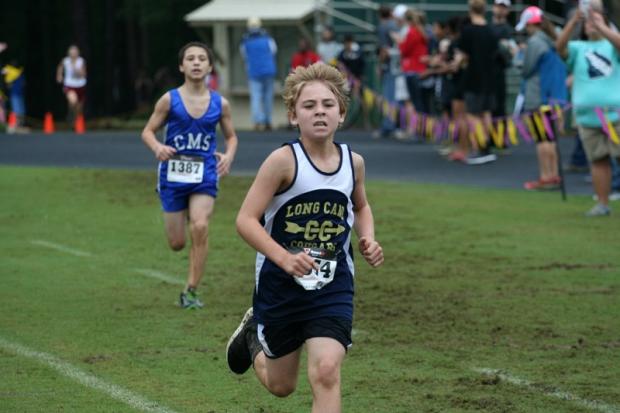 It was worth the trip over for Long Cane's Colton Esposito as he took 2nd in the JV Boys. 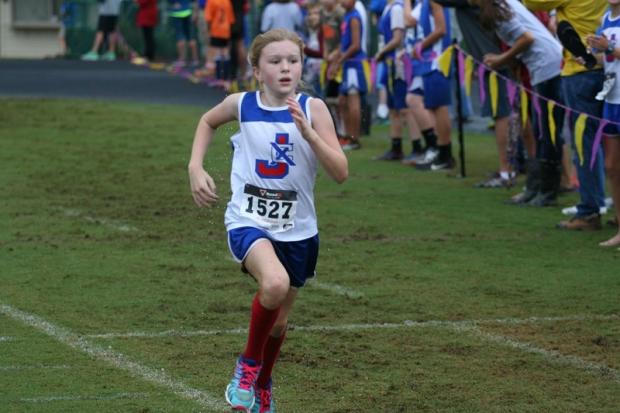 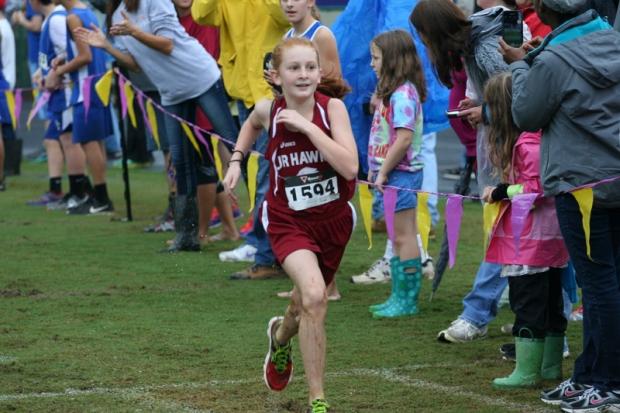