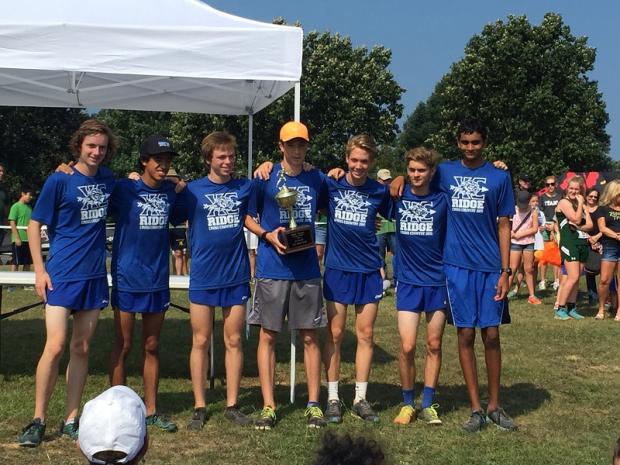 It finally feels like cross country season again now that Berry is in the books. Races in August are fun, but for me cross country doesn't officially start until I see that crowd of 400+ runners blazing through the Clara Bowl.The Berry Invitational had 53 teams tackle the Clara Bowl course Saturday as the Mill Creek Girls won easily while Peachtree Ridge's Boys nipped 3A Blessed Trinity by 2 points. 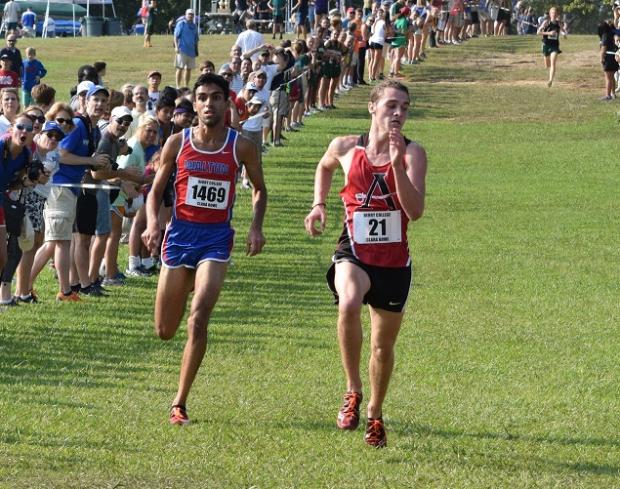 Boys individual - This one seemed wide open at the mile mark. There was a group of about 7 guys all within a few seconds of each other as they headed up the hill to the mile mark. By the 2 mile, things had changed. Tommy McDonough of Hoover appeared to have left the Georgia boys behind as he had about a 7 second gap on the rest of the field and looked like he was going to cruise to an easy victory. But the Georgia boys were not going to be left behind. Colton Page and Andrew Singh gave chase. Page said he focussed on all the hill training he had done to help him catch up to the leaders. By the time they reached the final hill it was a two man sprint to the finish. Page and Singh were side by side for almost 200 meters until Page finally pulled away up the last little hill. Corson Teasley also caught McDonough in a strong final mile for the trojan who took 3rd overall. McDonough would pay for his early move with a 4th place finish. Nate Reichard and Junior Suarez also gave chase over the final mile and finished with a strong 5th and 6th place showing respectively. Colton Page from Allatoona had a huge race taking the Individual crown in 16:06 just nipping Walton's Andrew Singh at the line (16:07) Corson Teasley of North Hall HS had another strong outing placing 3rd overall. Rounding out the top 10 (not mentioned above) were Junior Suarez of Johnson (Gainesville) taking 6th in 16:35, Michael Hans from Oconee County in 6th at 16:46 and Max Golema from North Paulding 10th (16:58) 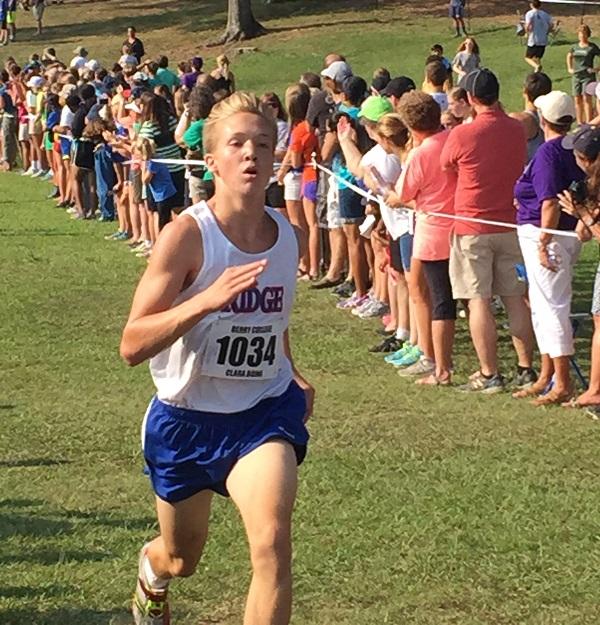 Chase Condra of the Ridge was their #3 at Berry clocking a 17:20 (pic by Steven Condra)

It was quite a battle for the varsity boys team title as 6A Peachtree Ridge slid by defending 3A Champ Blessed Trinity. This race was too close to call the entire way. Peachtree Ridge appeared to have better front runners, but Blessed Trinity had a great pack of 3 working together. It came down to the last few seconds of the race as Ridge pulled out a 2 point victory over the Titans. Hoover snuck in there for 3rd to take another trophy home to Alabama, and the Harrison boys outlasted Walton for the final piece of hardwareThe deciding factor was The Ridge placed 2 runners in the top 10 and their 5th runner besting the Titans' 5th by places. Nate Reichard led the Lions efforts placing 5th in 16:26 and Pedro Solares taking 9th in 16:55. After not racing at the Mercy meet, Robby Gipson began his season going 7th overall posting a 16:45. Hoover (AL) earned 3rd as a team led by Tommy McDonough's 4th Overall in 16:25. 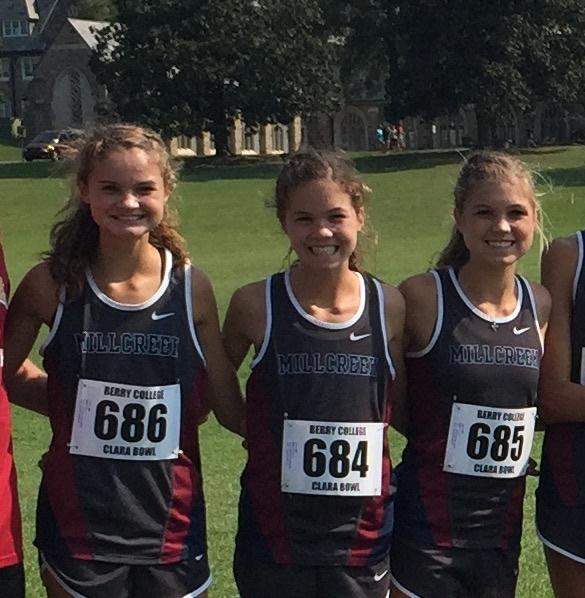 Varsity Girls Team Race- Mill Creek crushed everyone at NEGA 2 weeks ago and continued to roll at Berry winning the team title by 25 points over a very strong AA squad in Lovett. The Mill Creek girls came in as favorites and left no doubt on this course. They started out in the lead and never looked back. Lovett girls got a good start and gave chase the second half of the race, but just didn't have enough to match Mill Creek. Huntsville had a strong 3rd place showing, and then Blessed Trinity just barely nipped Harrison and Dunwoody for the final trophy. the deep girls field certainly was impressiveThe Hawks were led by the Petit sisters once again as Hannah Petit crossed the line 4th in 18:31 with Camryn Petit about 35 meters back in 18:36. Lovett proved they will be hard to run down in AA this Fall taking 2nd as Serena Tripodi placed 3rd in 18:30 and frosh Hailey Hooper came in 6th at 18:48. Huntsville (AL) took home the 3rd place team hardware behind Abbey Weitenbeck (10th) and Abbey Zane (11th) 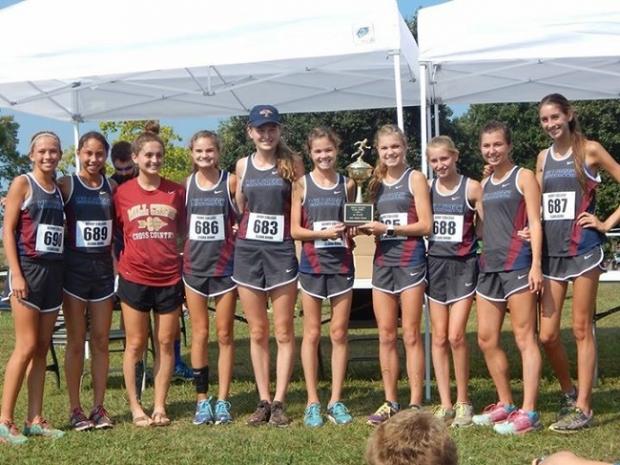 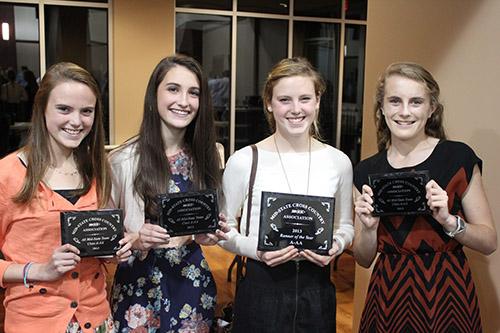 Varsity Girls individual Race - This was a loaded field on paper, and it did not disappoint. They got out FAST today. I unfortunately forgot to get a watch on this race, but I heard reports that they were something like 2:40 through the 800. The Pettit sisters took the lead early and Cheaseman was way back in 10th. By the mile there was a good lead pack of all the expected contenders, still with the Pettit sisters leading the way. By the time we saw them again things had changed. Cheseman had a pretty good gap on the rest of the field, but the pack of Pettits, Solomon, and Tripodi were still running strong. Coming down the final hill Cheeseman made it look easy running an impressive 18:06 on what is not an easy course. But the Georgia girls did not disappoint. Coleman had the best kick of the chase pack to take 2nd place, but Tripodi and the Pattits were still right behind her, all breaking 18:40. Coming down the final hill super frosh Haley Hooper caught and passed Jenna Gearing as both girls broke 19:00 putting an impressive 7 girls under 19:00 in the heat of the Berry Clara Bowl invitational. Mary Claire Solomon of Blessed Trinity was a strong 2nd clocking a 18:26. Rounding out the top 10 not mentioned above was Jenna Gearing from White County in 7th (18:49), Stephanie Ward of Darlington 8th (19:13), Taylor Luthringer of Signal Mountain 9th (19:13)