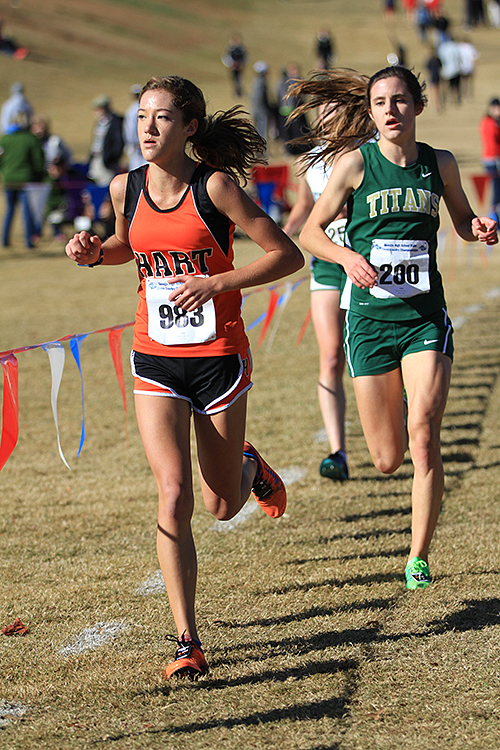 AAA Girls is very similar to Boys as Westminster and Blessed Trinity's deep and traditionally strong Girls programs are just on another level than everyone else. Blessed Trinityreturns their top 6. It will be fun to see if they run heads up before Region as its seems they avoid each other during the regular season. Hart County is a strong 3rd but it would take cloning Audrey Honiotes x 2 to come even close to the Cats and Titans. There seems to be large gaps between other top 10 schools aside from Savannah Arts and Coahulla Creek at 4/5. 8-AAA's Dawson County, Morgan County, Fannin County and East Jackson will fight at Region for State spots. Decatur is a top 10 team early. Pierce County placed 15th at State and's a bit of a mystery due to the courses they compete on during the season. Oconee County graduated their core and after making the Podium in 2014 and will need to rebuild.

Westminster- Westminster made sure it wasn't so closelast season as in 2013 with the crazy tie being delared with Wesleyan as they moved up to AAA to battle against rival Blessed Trinity winning convicingly by 22 points. Not so much by points, but by their top 4 making All-State with #5 in 11th. And....bad news for AAA, their entire top 7 from State is back and the Cats always seem to develop a couple of frosh from their low key MS program. Returning to lead are Margaret Maxwell, Delaney Graham, Gabby Bunnell and Carson Simon.

Blessed Trinity- Blessed Trinity returns their top 6. Yep, that's correct, and don't be surprised if a frosh or 2 begin to make an impact by late October. Yet, it still may not be enough to beat Westminster 11-7. The Titans look to be led early by Sr. and defending 1600/3200 champ Mary Claire Solomon (also 2014 XC runnerup.) A strong core will be bolstered by Emma Rose Bagwell and Maddie Heller.

Hart County- This program has come a long way under Cecil Maret, From Region also ran to Champ and impressive 3rd place and a Podium spot. It does not hurt when you have defending AAA champ Audrey Honiotes scoring 1 point, but the improvement of their 2-5 has been the difference. They clearly are the team to beat in 8-AAA this season as Oconee graduated their core. Its going to be hard to close the gap any on 1-2 but not impossible as their entire top 7 returns.

Dawson County- Dawson County placed a respectable 5th at State and is the defending 7-AAA champ which they won easily, but have a better chance at cracking the Podium this Fall. 6 of their top 7 are slated to return and if they had a good Summer may push Hart County. Marley Hamby was their top runner at State as a frosh (22nd) and their 2-5 could form a tight pack.

Savannah Arts- Much like their Boys squad, they have benefitted dropping down to AAA. Placing 8th in 2013 and moving up 2 more spots to 6th in 2014. Their top runner Hailey Keating returns with a pr of 20:38 along with 5 of their top 7. Challenging Dawson County for a Podium spot looks realistic with improvement.

Coahulla Creek -May have a had a tough race on the hiils of Carrollton at State placing 10th in 2014 after looking at their best times, the Colts prospects could improve dramatically as 6 of their top 7 should be back for this Fall. Sophomore Rebecca Poe is their fastest runner and soph Rachel Ward was right behind her at State.

Decatur- This is a program that has a huge MS feeder system from Renfroe, but many may seem to lose interest in competing on the HS level. Decatur was a distant 13th at State, but this season could be more competitive as 6 of their top 7 are slated to be back including top runner Sr Casey Todd who was 16th overall at State.

Morgan County- Definitely a program on the rise as the Bulldogs are even hosting 2 meets this Fall. Morgan County enjoyed some success in 2014 placing 9th at State. A hungry squad with their top 7 slated to return would like to return to Carrollton and move up this season. Top 2 runners last season were Lakashia Willis and Yakira Chapman.

Jefferson- 3rd in 8-AAA and 4 points behind Savannah Arts at State. The Dragons could have4 of their top 7 back including top returner Maggie Dyer. 8-AAA will have 5-6 teams battling for 4 tickets to Carrollton 11-7. Their JV's and freshman will need to contribute this Fall to qualify.

East Jackson- The East Jackson girls will be young, but much improved from last season. Leading the way will be Sue Moralis (State Champ 800m & 1600m) and 6th at 2014 XC State. Anna Fox (Freshmen), Abbie Howington (Freshmen), and Emma Fox (Sophomore). The young Eagles hope to make it to the state meet in Carrollton.