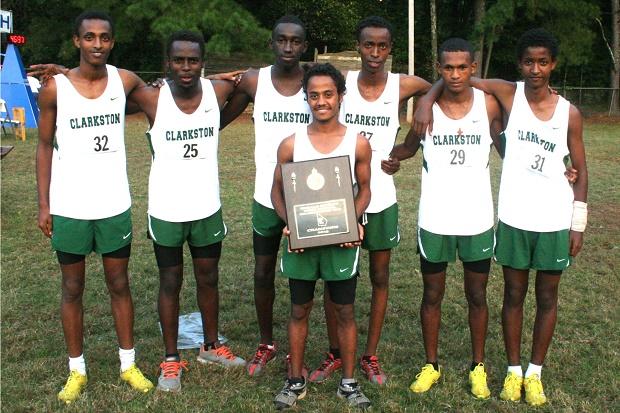 A proud defending champ, Clarkston should be a contender in 5A Boys again this Fall

The team title is up for grabs after so many talented Individuals graduated. But, the main crux will include some well knowns, including Flowery Branch, defending champ Clarkston, Forsyth Central, Creekview, Starrs Mill and McIntosh as the primary Podium contenders. Alexander had a great race at 2014 State ad has to be included in the mix as well.

Flowery Branch- “The Branch” always has a tight pack come November and this year is no different. In 2014 they were 6 points within a State title.Their front runner Jake Shewbert is back along with last season's 2/3 in Grant O'Callaghan and Shawn Olmstead. Nearly all the courses they competed on with the exception of Wendys (McAlpine Park) were challenging courses, so their returners fastest times are most deceptive.... If they stay healthy, it may not be close.

Clarkston- Last years’ defending champions have some holes to fill, (most notably Abbas Abbkar) but still return a talented squad that knows what it takes to stand atop the podium. The Angoras (much like Flowery Branch) only ran on 1 fast course (Bob Blastow)very early season, so their fastest times are more credible than the database allows. Back this Fall should be Awet Ftwi, Binewam Tumbo, Bereket Tewoldemeheret and Suheib Mohamed.

Forsyth Central- The Bulldogs were the surprise team in Boys 5A during the 2014 season, but came up 7 points shy of a Podium spot (largley due to Alexander having a great race) Good returning pack with state experience. Six of their top 7 should be back including a tight top 4 of Max Warner, Charlie Webb, Will Hasse and Cole Gizelbach.

Creekview- This Fall is potentially Creekview's best shot at a State title. Placed 6th in 2014, with lots of experience returning with their 2-6 runners all Seniors(lose only Brennan Garriques) along with a potential front runner in sophomore Zac Cantrell.

McIntosh- Haven’t been able to put it together at State the previous two years, but they return one of the more talented teams on paper in 5A this year. They could very well finish much higher. The Chiefs return their entire top 7 including Connor Reynolds, Brian Doyle, Tyler Nigro and Connor Koscevic.

Starrs Mill- Solid pack returning that had good Spring track seasons. Not out of the question to see 4 teams from their region in the final top 10 (Mcintosh, Starrs Mill, Union Grove, Northgate) Top runners are Nicholas Bryant, Joshua Tysor and Reed Livingston. Their home course (Heritage Christian Church) is beautiful and quick.

Alexander- Pulled a stunner at State in 2014 making the Podium after not being mentioned in the 5A Boys preview article. Returns a young front runner in Tyler Whorton, but will have to come with up with depth beyond the top 3. Braeden Collins and Austin Muse were a big part of that 4th place squad at State.

Union Grove- Coming off two consecutive top 10 state finishes including 7th last year. However, graduation appears to have taken its toll. May be a late season sleeper if the young guys develop. Matt Seitz was their #2 at State in 2014.

Allatoona- Finished 9th in 2014 returning 4 of their top 7. Have a very talented front runner in Colton Page, but the Bucs will need to fill in behind him to challenge the top teams.

Northgate- New XC coach Brad Wilson (formerly of LaGrange) had a strong track season with his distance squad. This could be the year they put Northgate Boys’ XC on the map along with the Girls’ program. Anfdrew Tuttle and Sherman Dewey are their top returners.