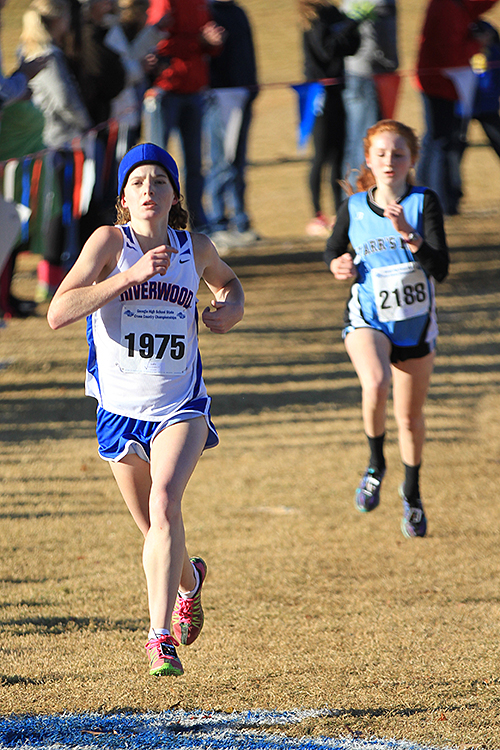 Elizabeth Graves from Riverwood placed 2nd at State in 5A. She is followed by Starrs Mill's Mary Valli. (pic by Daniel McCauley)

Dunwoody- Last year’s champions look poised to repeat barring injuries. The Wildcats return their entire top 5 from their 2014 State Championship team including 5A 3200 Meter Champ Ansley Heavern. Sophomore Kelly May Sheehan led the Cats at 2014 State placing 5th and Samantha Cameron (12th) give them a powerful hreesome up front.

Starr’s Mill- The Panthers had a strong runnerup finish last season at State and will look to challenge again for a title. Led by their talented front-runner Mary Valli, Sarah Phinney, Sophie Handel and Tori Nails give the Panthers a potent quartet. Starrs will need to develop the back half of their pack if they want to upset Dunwoody.

Flowery Branch- Last year’s team was very young. Depending on their Summer running, could they be ready to challenge for the top spot? The Falcons were 6 points away from a Podium spot in 2014. Returning 5 of their top 6 gives them a good start. Top runner at State Mariah Milsap is back with a tight supporting pack including Erica Plummer, Hailey Pearson, Shannon Hoolahan and Kelly Kritzinger.

Creekview- The Grizzlies returns a solid pack with state experience and could challenge for a state title. Reurning 5 of their top 7 led by Lauren Wallin, who placed 7th last season at State, Creekview has risen quickly in the ranks for a fairly young school. It will be interesting to see if a frosh or 2 develop thru the season.

Cambridge- This is a newer school that has benefitted from the horbed of distance running in the Milton area. Solid packed up group (1-5 Split 46.85) returning with state experience, they will need to develop a front runner to crack the podium. Sophomores Chloe Phelps and Chloe Paskins placed 19th/20th in Carrollton last November.

Northgate- The Vikes ran well as a team at State earning a coveted 4th place Podium spot. Returning at leat 5 of their 7, Northgate will be strong up front one again led by 2014 5A All-Stater Caroline Nelson (10th), Elise Glorvigen and Erica Lee, but depth will be the determining factor on where their girls end up.

Columbus- Columbus seems to always be in the top 10 every year. Finishing 8th in 2014, a talented team flew under the radar for much of last season racing primarily in Muscogee County meets. Solid pack returns 6 of their top 7 with state experience. Senior Alina Salgado should be leading the way.

McIntosh- Another school located in a community that supports distance running (Peachtree City) Had a disapointing end to their 2014 campaign placing 7th. Always a dangerous squad, will need to develop their #4-7 to challenge for the podium. Chiefs return at least 4 of their top 6 including top 2 Allyssa LeClaire and Rachel Ward.

Richmond Hill- Coach Levi Sybert has been a boon to this program the past few seasons placing 9th in 2014. This could be the year they make a statement. Depth could be a concern, but they return a good pack with state experience. Strong top 2 should be back including Jenn Thorpe and Rachel Hammesfahr.

Lakeside-Evans- Return their top 5 led by defending state champion (Alyssa Hooker), Lakeside had a pair of 9th graders (Maggie Bembry and Tamera Mistry) running at state last year. If they can take the next step up and some depth is found/made, they can move-up.

Riverwood: Probably the best 1-2 punch in the classification with overall runnerup Elizabeth Graves and Anna Hayden, but depth was a major issue last year.

Union Grove- A hungry young team with an influx of talent from their middle school program will look to upset some of the more veteran squads this season. Returning 6 of their top 7 from 2014 certainly doesn't hurt the Wolverines chances. Senior Ellunde Montgomery should lead the pack.