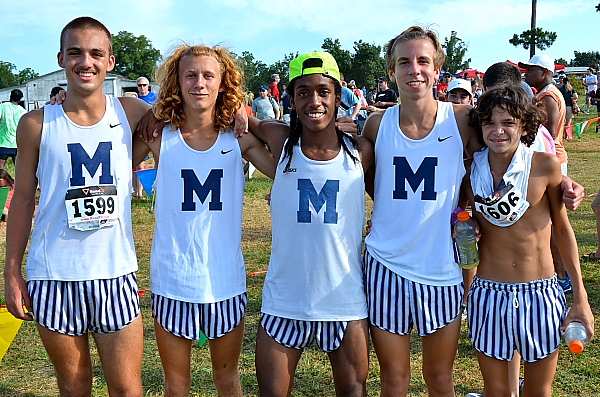 Will Marietta (above) go undefeated against GA competition this season? Answer:  Highly Likely
6A Boys Team:

Team Race Analysis
After Marietta, the team battle is intense.  The rankings have changed a good bit all season, and there are quite a few teams that should be considered contenders.  Could Brookwood hold an advantage with such a tight 1-5 pack?  Brookwood is still Brookwood, and Coach Dehnke always has his guys ready for the big one as evidenced by last year’s title.  That pack could be the answer in such a wide open field.  Teams like Walton and Mill Creek have more ‘star’ power at the top, but do they have the depth at #5 to hang with the likes of Brookwood or Milton - another team with a tight 1-5 split (only 34 seconds en route to their region championship)?  Coach Carr certainly wants to prove his team’s worth at State.  Etowah lost a little bit of ground at their region meet but are still a threat led by a strong senior duo.  Peachtree Ridge, led by Isaac Penman, have faded since the early part of the season, but first year head coach Matt Adams will surely be out for redemption.  South Forsyth, once ranked #2 in 6A, will attempt to prove their worth following some impressive races.  They did just lose to region and county foe West Forsyth though.  Could there be two Forsyth County schools on the podium when the dust and woodchips settle?  Other teams that should be taken seriously include Lakeside-Dekalb, Harrison, Lambert, Kennesaw Mountain, Parkview, and Cherokee.  In a team race where there is a great mix of ‘new’ talent with ‘historic’ talent, it’ll be quite entertaining.  If you’re doing anything besides watching this race at 1:25pm in Carrollton on Saturday, you’re doing something less cool.  Seriously.  Be there.
6A Individuals: