New Course Clink on Link above..Many of the 'Pecan Lanes were lost due to sale of the parcel of land. Wheels will be a rollin' Coach Raposo...
On the girls side it should be a nice battle for the team title while Metro teams Pope, Lovett, Riverwood                         International, North Gwinnett, Union Grove, and Columbus will look to take home the team title.  Could be a great race for the Overall with Top female Individuals to BOLO for are many Fastest All-Class Top 50 and 2014 'ROWs' including Anna Hayden and Elizabeth Graves of Riverwood, Serena Tripodi of 2A #1 Lovett, Ashley Kehoe of Pope, Elizabeth Funderburke from nearby Colquitt and Tiffany Mountin from Perry HS. 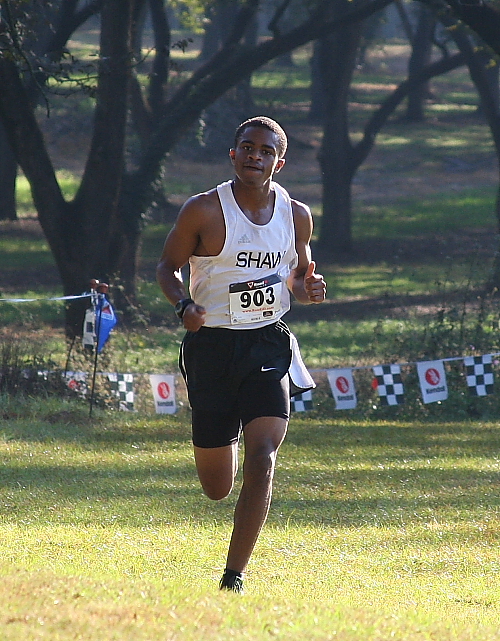 2013 Boys Champ Hakeem Mustafaa is a threat to repeat this Saturday.
On the boys side, the favorites are Cherokee, Smiths Station (AL), Union Grove, and Alexander competing to see who comes out on top in the HUGE Varsity Boys race. (Over 350 runners at least) A few of the best male harriers out on the course will be 2013 defending Champ Hakeem Mustafaa of Shaw, Taylor Scarbrough from Woodstock, Chase Harris from Bainbridge HS, Wilson Moore of Chapel Hill, Lance Smith of Alexander, Griffin McCauley of Paideia and Smiths Station studs Jerric McCoy and Brandon Bennefield.  My upset pick is Devin Dixon from Eagle's Landing HS.
Tweets by GAMilesplit