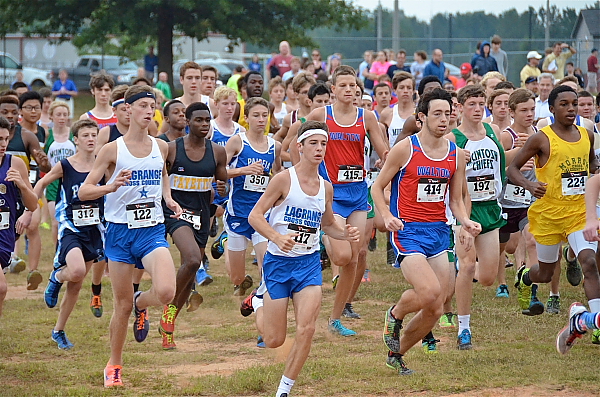 Eighteen eager Varsity Boys Teams wasted no time charging to the first corner only 150 meters from the start.  PIcs by Daniel McCauley
Lots of jostling occurred as the Varsity boys jockeyed for good positions to make the turn heading towards a wooded dip in the course.  After a narrow dodge through the trees, the course immediately leveled out onto a long, broad field, perfect for opening up strides.  Paideia Frosh Griffin McCauley worked his way to the front and led for the first mile, going through at 5:05, with Cameron Pack of Morrow in chase.  On the second of three laps, former 5A Runner of the Week,............. 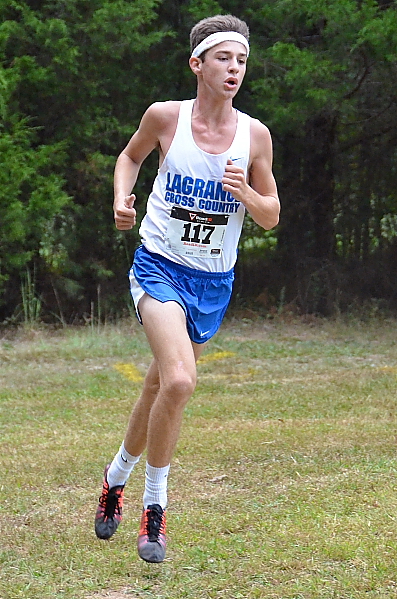 Lagrange's Sam Bowie begins to motor away from the pack   Pics by Daniel McCauley
Sam Bowie, and Granger running mate Jonathan Pelham decided it was time to take control of the race taking the lead,  Pack jumped in on the action behind Pelham quickly staying in contact.  Meanwhile, Pace Academy frosh and MileSplit 2A runner of the week, Jack Douglass, was moving up through the pack with McCauley in his sights.  On the final lap, Bowie began to stretch out his lead, and Pelham began to gap Pack.  The LaGrange duo rolled smoothly into the finish, separated by :16.  Bowie posted a season best time at 15:57.49.  Not too far behind, in the final 400m, McCauley and Douglass dug deep and passed Pack  placing third and fourth.  In a photo finish for sixth place, Conner Reynolds of McIntosh outsprinted Mark Grenader of Pace by a scant .14 seconds.  Coming from behind, Max Heaberlin of Paideia edged out Robbie Eisenman of Walton by one second to take eighth, and Brian Doyle of McIntosh rounded out the top ten.
Varsity Girls 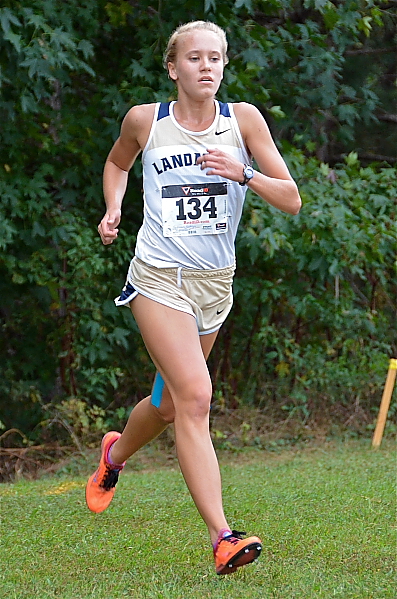 Another race, another win for Kathryn Foreman    Pics by Daniel McCauley
In the Varsity girls race, the Landmark girls put on a clinic going out hard and never looking back.  Throughout the whole race, Kathryn Foreman led the Landmark sweep, followed by Nicole Fegans and Kat’s younger sis' Sarah.  Alyssa LeClaire of McIntosh, Ashley Wood of The Heritage School, and Rachel Ward of McIntosh valiantly gave chase and battled for position.  In the end, they came through the finish in that order. 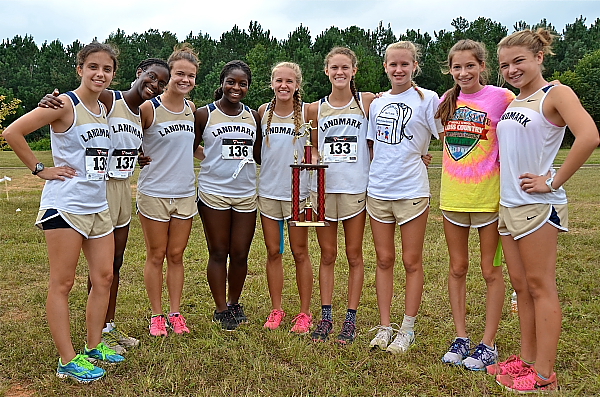 A happy Landmark Christian Girls squad after their win at Coach Daley    Pics by Daniel McCauley
Following in the footsteps of her teammates, and improving with every race, Mary Kellison Thorn of Landmark was also in on the action, helping to secure her team’s overall victory with a solid seventh place finish.  Northgate’s own Caroline Nelson pushed forward to eighth place on her home course, followed by Ruthie Powell of The Heritage School, and Pace Academy’s Julia Ross closed quickly over Brianna Sattinger of McIntosh to take tenth by less than a second.
JV Boys 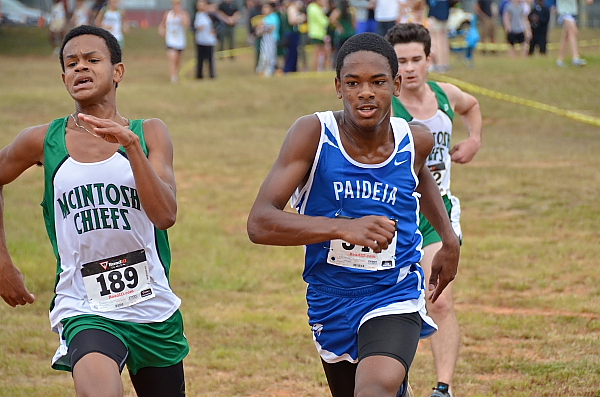 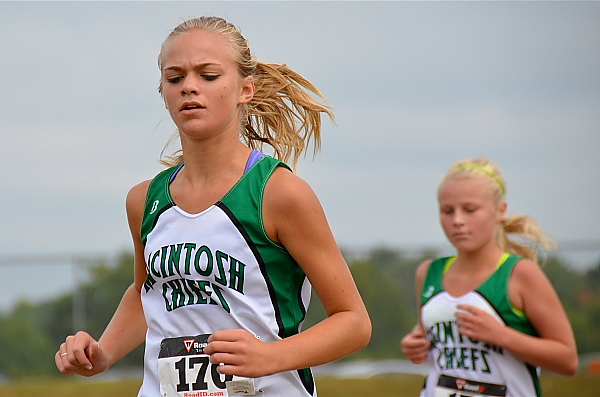 McIntosh JVs Caroline Baynes and Clara Comiskey take 1st and 2nd in the JV Gals race    Pics by Daniel McCauley
McIntosh also had dominating runners in the JV Girls race, with frosh Caroline Baynes and Clara Comiskey taking first and second, but it wasn’t enough to keep Pace from winning the Team competition, as they took 3rd, 5th, 6th, 7th, and 8th.  Sophie Blasberg led the Pace runners, Carlee Pokalsky, MaryBrooks Perkey, Rachel Much, and Sarah Lattes.  Only Alexa Bilsky of McIntosh broke up the Pace train, taking 4th, and her teammate Hannah Wild followed in ninth.  Esther Riordan of Northgate, coming in at tenth, led her team to a solid third place finish. 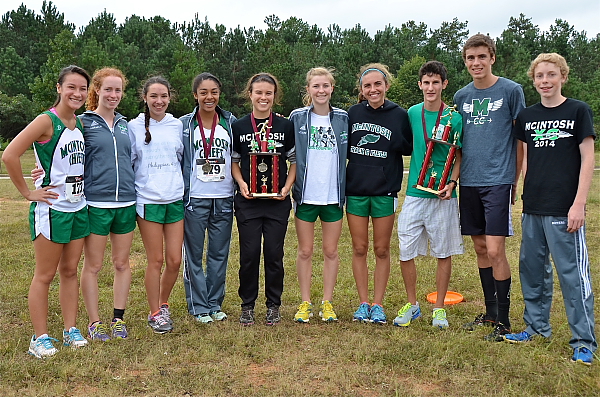 McIntosh Varsity Squads enjoyed a successful meet as the Boys placed 1st and Girls 2nd     Pics by Daniel McCauley
Northgate High School provided an excellent venue for a well-run event, professionally timed, on a course that allowed many runners an opportunity to run middle of the season PRs.  There is no doubt that all the schools in attendance will want to return next year to participate in this terrific meet once again.
Complete Coverage
Tweets by GAMilesplit