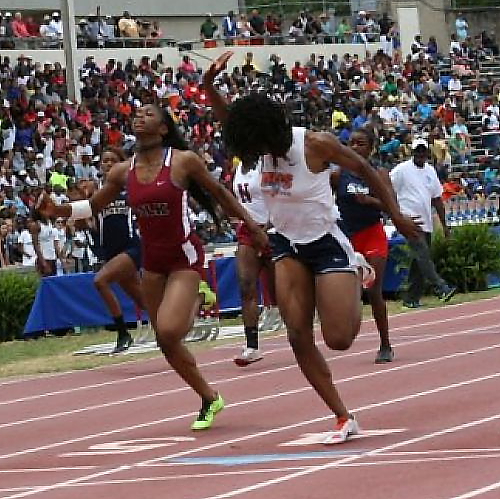 Pictured above is Cassondra Hall down in ALB last Spring
Cassondra Hall led the Eagles to victory winning the 'high point' award by laying down a scorching 11.88 in the 100 meters and cruised on in for the win in the 200 at 25.00 after winning the LJ an hour earlier in 16-2.75.   Northside WR swept both relays 47.68/4:16.10 and went 1-2 in the 400m behind Toneah Martin and Tia Williams as the duo battled down the homestretch clocking 58.25/58.88 Williams went on to win the 800m in 2:30.63 after splitting a 1:04 on lap 1. Martin also won the Triple Jump earlier with a mark of Takera James swept both Hurdles events also scoring big points. Mekhaela Witherspoon and Sunshine Walton swept both Throws events as well.
The host Demons scored 46 points in the Field Events giving them enough cushion to chip away in the running events to win the County title. If not mistaken, Richard Campbell from the Demons won the 'high point' award with his performances in the 110/300 Hurdles, LJ and winning 4x100 relay squad. Kaman Cooper won the 400m dash in 52.96, Campbell and Trevor Williams were 2nd/3rd in the 110h, Marquez Callaway cleared 6-4 winning the HJ, and Jacob Jamerson won the Discus and placed 3rd in the Shot sparking an early lead.
Complete Results
Below are the performances entered for the meet that met the national silver standard.