6A-  Brookwood Bucks Off a Strong Field for Team Title, Mills Too Tough Takes Overall Title 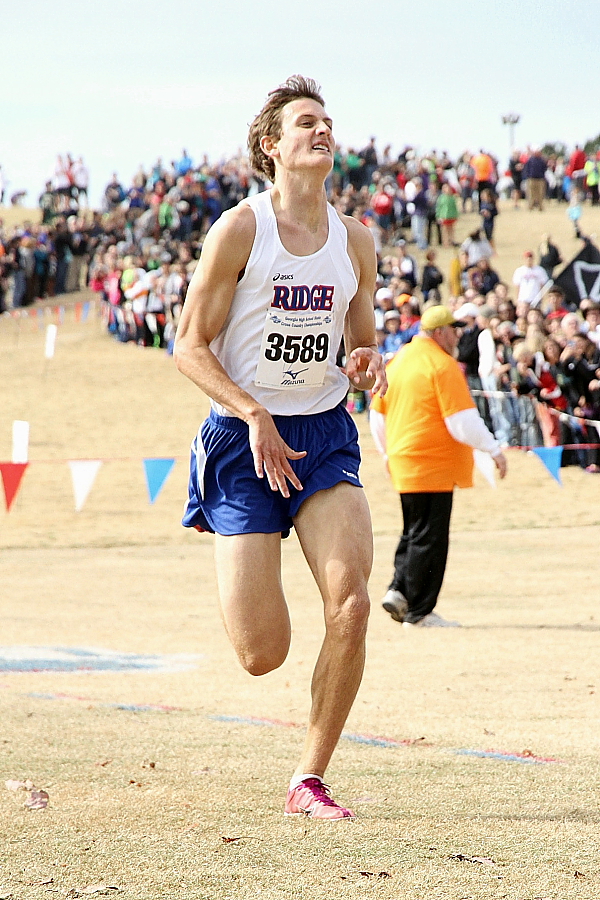 Kevin Mills of Peachtree Ridge was a man on a mission settling who the top harrier in Georgia is in 16:03     Image by Jonathan Speights

What a race. So much drama. The early lead pack included most of the familiar faces everybody was expecting to see  (except where was Dunlap?). Mills was here to make a statement and took the early lead of about 5 seconds at the mile and never looked back clocking the fastest time of the day in 16:03. Behind him there was lots of movement as the team race was intense. Halfway through the race there was no way of knowing who was winning with everybody's pack so tightly bunched. Brookwood looked to have a slight edge with a couple of guys up front, but Marietta, Colins Hill, Parkview, Harrison, and Etowah all had their packs running together. Mill Creek and Peachtree Ridge were both in the mix with some front runners each, but they needed their 4-5s to move up.

Kamau ran a very strong 2nd almost the entire race. Westog led the chase pack most of the way and held on for 4th after ingalls launched his kick to take 2nd from Kamau. Schofer did some leading too as he held on for second as Ellis took him in the end. Farmer faded to outside the top 10 and Penman looked good taking 12th. Soloman got 10th in a good race. Josh Ingalls shocked many today with a strong 2nd place finish in 16:19 with teamate Miles Yapp closing hard in 5th at 16:30. Ryan Massey's 17th place finish was also crucial. Kevin Mills took the lead before the 1st nasty little hill and had a 30 meter gap going into loop 2 chased by Westog, Kamau, Woodrome, Schofer with Marietta and Brookwood had small packs following the top 5. Mills extended his lead to almost 120 meters charging tall across the mats for a well deserved individual title in 16:03 posting the #1 Boys time of the day. 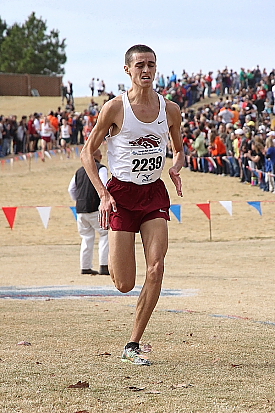 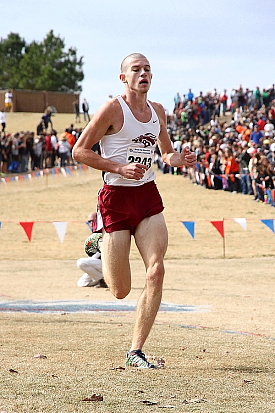 Josh Ingalls of Brookwood 2nd at 16:19    Images by Jonathan Speights   Miles Yapp of Brookwood 5th at 16:30
For the team race at the two mile Brookwood looked like it was over. Marietta was the only team even still pushing it and Carrollton has proven to reward teams who have a strong 3rd mile. Marietta had a strong 3rd mile, but it wasn't enough, even with Brookwood's 3rd man fading to be their 5th and falling on the final hill. Peachtree  Ridge Showed Strength in their top 3, but didn't quite have enough to overcome Brookwood's strong top 4 as they took second to their Gwinett County rivals. Marietta faded and maybe had a runner DQ'd? There was an incident with a Peachtree Ridge runner and a Marietta runner coming down the final hill. Both runners fell and the Peachtree Ridge runner fell again right before the line. He lost 10-15 points. Were those the difference between them and the win? It will be interesting to see if anybody has video of that? Harrison ran with their strong pack to take 3rd and Collins Hill snuck in front of Marietta to take the final podium spot. A drama filled race ended with the Gwinnett powers dominating as usual. Mill Creek fell out of contention when Tyler Woodrome fell in the 2nd mile when he was in 9th place.
Peachtree Ridge and Harrison fought down the final hill to a tie with 121 points each bringing once again the 6th runner tiebreak into effect with Ridge taking 2nd. Ryan Brock led the Hoyas 3rd place team effort placing 8th in 16:41. Collins Hill had a great race snatching the final Podium spot just 8 points back as Daniel Ellis led the Eagles placing 6th in 16:31. Individuals making the All-State squad included Brian Kamau from Shiloh placing 3rd in 16:25, Eric Westog of Mill Creek in 5th at 16:27, Parkview's Nick Schofer placed 7th in 16:32. Jack Henderson led Marietta to a strong 5th place team effort 2 points behind Collins Hill clocking a 16:44. Nahom Solomon of Shiloh got props on the Podium coming in 10th at 16:45.
Meet Results