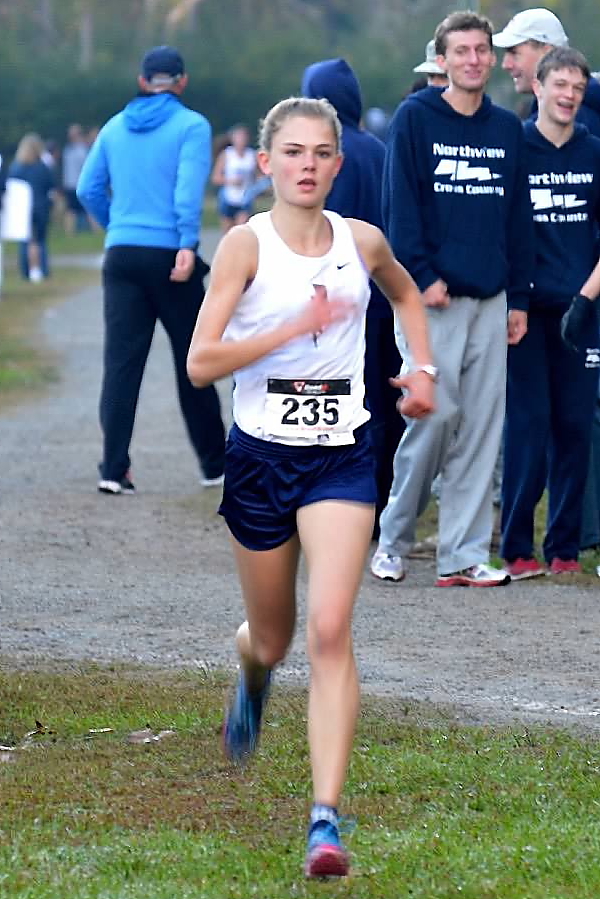 Lindsay Billings of Northview coming into the finishing chute
In a race full of fast competition, Sophomore Lindsay Billings of Northview took control, defeating rival and defending champion, Ashley Kehoe of Pope by 33 seconds.  Region Champion Lindsay Billings' time of 18:17, along with teammates in 6th place, Anna Barefield (19:28), and 9th place, Tiffany Yue (19:56), led the Northview Girls to a dominating finish, scoring three girls in the top 10 and their remaining two girls in the top 20, with a team average of a blistering 19:42, strongly defending their title as Region Champions. Ashley Kehoe’s Pope High School made a strong showing as well, scoring all of their top 5 girls in the first 25, giving them a solid 2nd place and qualifying them for state. Also qualifying for state was Creekview, who placed 3rd, only 5 points behind Pope and Riverwood.
Individually, Region 7 AAAAA will send, in order Billings of Northview (18:17), Kehoe of Pope (18:40), Kuersten Gallivan of North Springs (19:18), Anna Hayden of Riverwood (19:21), Barefield of Northview (19:28), and Olivia Terwilliger of Kell (19:30) to compete in the state meet.
Boy’s Varsity 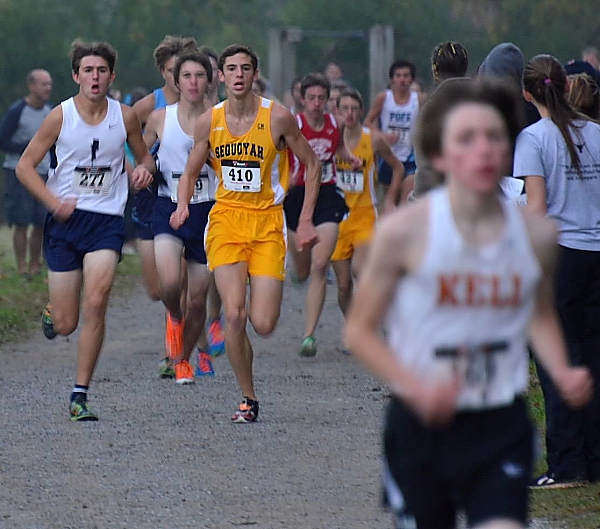 Logan Poteet of Kell leading out the race in Mile 1, followed by Salter and Costa
The blazing junior from Kell, Logan Poteet absolutely dominated this race with a blistering 15:48, taking the individual title with ease.  Right behind him, however, rival runners from rival schools, Christopher Costa of Sequoyah, and Josh Salter of Northview, battled it out for second to lead their team to a Region Championship.  Both seniors fought hard but Sequoyah’s Costa edged Northview’s Salter in the chute by less than a second. Despite Sequoyah’s #1 defeating Northview’s, the Titan’s top 5 proved to be stronger today as they placed not just Salter (3rd place, 16:10), but captured 6th place (Jamie Cunningham, 16:40) , 9th place (Adam Burkley, 17:01), and 12th place (Cole Matthews, 17:08) as well. Those three, and a team average of 16:52, ensured the Northview Boys their first ever Region Championship! Although Costa’s Sequoyah boys fell to Northview at Regions, they will be out for revenge at state as they qualified only 10 points behind the Titans. Also qualifying in Region 7 was Pope, with an impressive 1-5 spit of 29 seconds, and Forsyth Central, achieving their first state qualification in their history, led by 4th place Max Warner (16:23).
Rounding out the individual qualifiers for state, Region 7 will send Poteet of Kell (15:48), Costa of Sequoyah (16:10.06), Salter of Northview (16:10.71), Warner of Forsyth Central (16:23), Brennan Garriques of Creeekview (16:30), and Cunningham of Northview, (16:40)
Girl’s JV 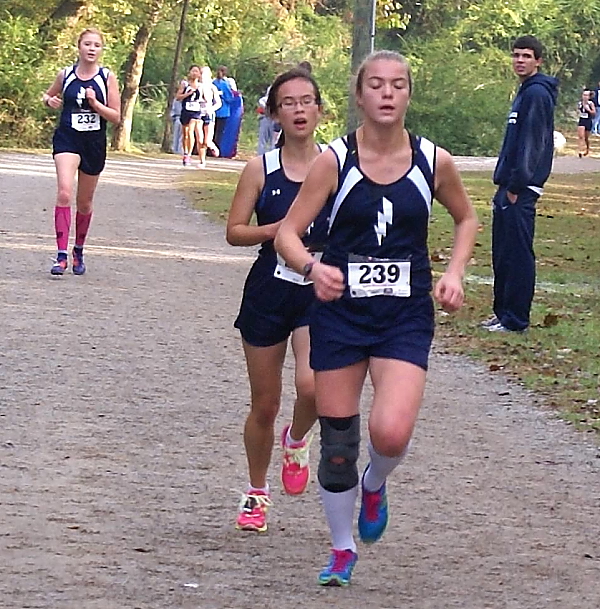 Kate Finn of Northview in the last 500m, followed by teammates, Hermes, and Barefield
While the varsity races showcased Northview’s speed, the JV races showcased their depth.  As 7 Northview girls found places in the top 10 to dominate the JV Girls race.  Senior Kate Finn led the charge with a 21:02, placing first.  If you watched this race, you would have thought it was just Northview vs. Pope as the two squads dominated the entire top 12, as well as only allowing one runner from another school place in the top 17.   Both schools proved that they have a solid future in front of them and we look forward to seeing their underclassmen JV girls rise to Varsity over the next few seasons.
Boy’s JV 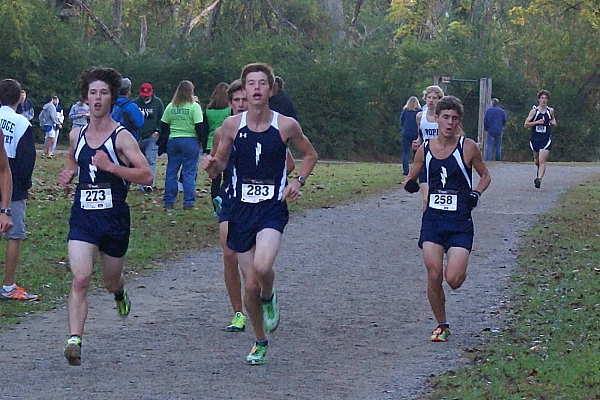 Nick Whitridge [center] racing with teammates O’Conner, Cunningham, and Hagenstad
Once again, the Titans of Northview dominated, placing their entire top 5, as well as their #6, in the first 10 places with an impressive 1-5 split of 39 seconds. Sophomore, Nick Whitridge of Northview won the race with a 17:27, only 5 seconds away from Northview’s 5th Varsity boy.  All in all, these Northview Titan’s have lifted up the bar for what it takes to win in this region and it should spur some fantastic competition in the next few years.
Complete Results
Tweets by GAMilesplit