Loading
It was another hot day in October as 14 schools converged upon Athens Christian School to race at the Ga.MileSplit MS 3K Challenge. Over 300 runners participated, 50 medals, 2 top performance awards and 6 team Cups were handed out to deserving athletes for many what would be their final race of the XC season. Other top teams used the event as a warmup race, for the State MS meet in Cochran 10 days from now. Kudos to the Athens Christian coaches for directing the meet, setting up the course, handling parking and presenting awards, namely Coach Cummings and his daughter Coach Reddish, Coach Fowler and his helpers and Fast Feet Timing.
Girls 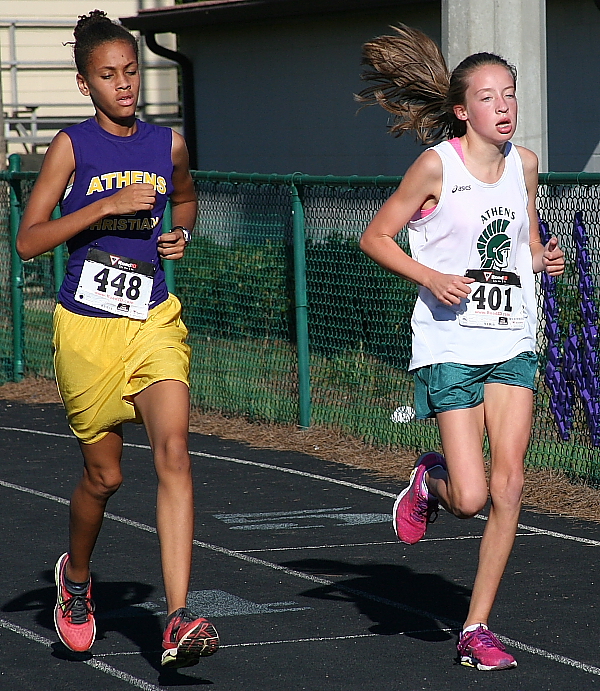 Two girls put the field away early and at the 1/2 way point of the 3000 meter race it was anyone's race in the front as Anna Marion Block of AA and Tanner Guest of host ACS dueled for position. Coming out of the woods 100 meters before the finish 8th grader Block had created some separation on Guest and charged across the finish line for the individual title in 11:25  Tanner Guest held on to 2nd about 75 meters back finishing in 11:44 The next 8 girls crossed the finish in a :30 split led by 3rd place Dominique Jenkins of the Newroc Rockets in 12:31, Jaelen Alexander of White County 4th (12:34) and rounding out the top 5 was Riley Mayer of Athens Academy in 12:40
Athens Academy was victorius snaring the team title w/ Block's win and Mayer's top 5 placing scoring 35 points defeating rival ACS by 24. Rabun County claimed the 3rd place team Cup 8 points back.
Boys 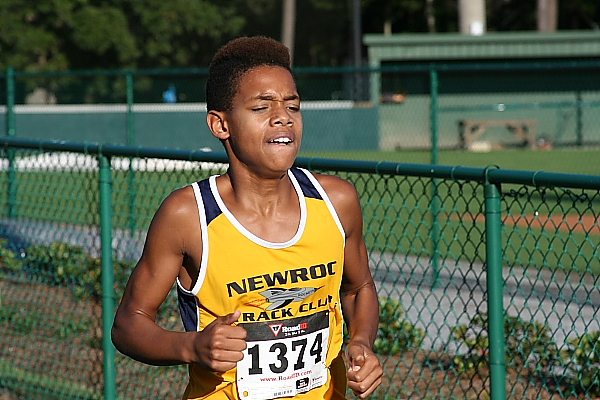 A pair of 'Jonathans' from the Newroc Rockets Club ruled in the boys race as a nice show was put on by former ACS MS student-athlete Jonathan Jenkins, as he put away the field early and ground out a convincing win clocking a 10:35 on the revamped course. Jenkins as one will see in the photo gallery had a huge lead at the 1/2 way point on the 2 loop course and was never challenged shortly after the gun. Teamate Jonathan Schulz raced well this afternoon placing 2nd in 11:11 leading Newroc to a 3rd place team finish. Gabe Mantione-Holmes of Clarke MS wasn't far behind placing 3rd in 11:15. Rounding out the top 5 were Dawson Frey of Oglethorpe MS in 11:23 and Jesse Reid of GWA 5th at 11:33. ACS though ran as a team and it payed off as the MS Eagles kept the "Webmaster's Cup" at home taking 1st with 62 points. Leading ACS was Orlando Stephenson placing 6th in 11:36. An ever improving Clarke MS boys program was 2nd, taking 3rd was Newroc
Complete Coverage and Results
Photo Galleries:
Ga.MileSplit MS 3K XC Challenge by gawebmaster
Video:
Tweets by GAMilesplit