Collins Hill and Darlington made the long trek up to Salem to compete against some of the top Harriers in Virginia and represented Ga very well. In the Championship Boys race Collins Hill's boys placed 6th overall in the 'Red' race led by 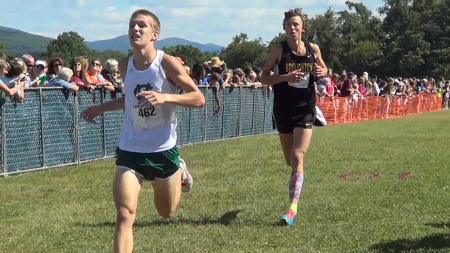 Daniel Ellis paced the Eagles up in Va this Saturday with a 16:09   Image Courtesy of va.milesplit

Darlington sophomore Stephanie Ward roared for the Tigers in 19:52  Image Courtesy of va.milesplit

On the Girls side Collins Hill placed a spot higher than their boys did garnering 5th place with a 1-5 Split of :50 in some intense competition sparking the debate are the Lady Eagles getting back to the Championship form of the first decade of the 2000's? Mariah Maring at 20:09 and Lenora Luce in 20:12 were the top Girls.Darlington again placed 9th with a 21:02 team average as soph Stephanie Ward was the top Georgian placing 21st in 19:52. Coach Parrish relayed,"Darlington had a great time at this meet outside of Roanoke. I recommend it if anyone is looking for a fun travel trip, we are staying at Claytor Lake State Park, which is 45 minutes south of the course"

We normally time this event, but couldn't due to personell issues this past Saturday, But will make every effort to be back in 2014. Host Winder-Barrow made it a team party by sweeping the Varisty team titles. The Lady Dogs held off 5A rival Allatoona by 12 points behind their own super frosh Micah Weathers as she obliterated the competition with a 1:30 margin of victory in 19:21.35 Teamate Amber Palermo chipped in with a 3rd place finish. Their Boys had a little more breathing room defeating a much improved Rockdale County squad placing 2 runners in the top 7 including William Wright placing 3rd and Tony Rowden 7th. Frosh Dax Willette continued to prove he's the real deal taking the Overall win in 17:21

In the MS races club squad 'Crown Athletics' won the Boys team race as their (6th grader) John Higginbotham had a photo finish win over Bear Creek's Jake Martinez both in 12:28  In a very tight battle for the team title Loganville came out on top as 3 teams were within 6 points of each other. Alaya Lindquist sparked the team win running away from everyone in 12:56

Just like when Grant came down South and burned Atlanta, Union Grove's troops came down to Grey and left with nearly all the hardware Saturday. The Wolves enjoyed an 80 point margin of victory over Evans in the Boys race Connor Dairymple was the alpha dog placing 4th in 17:29  Evans' Felipe Altorre won the Overall title in 17:05, but left me pondering what happened to Justin Weegar? Jackson Reid of Perry placed 2nd in 17:08 Veterans HS won the Girls team title beasting runnerup Union Grove. Bethanie Bailey sparked the team win by racing to the Overall win in 20:13 Perry HS runners took the next 2 positions including Abby Booth in 20:33. Union Grove won both JV races as well to end their campaign.

In a meet that surely won't be forgotten soon, some blazing times were set on the LCA course which will also serve as the host for the GISA State Championship. Junior Kaleb McLeod of Trinity Christian School-Dublin has established himself as a possible contender to Q' for the Foot Locker Nationals after laying down a 14:56 winning by a minute over tightly bunched group of 3 guys from 15:56 to 16:00 including in order of finish: Jacob Burgamy of Brentwood 15:56, Daniel Glick of Unity Christian 15:57 and former ACS runner frosh Joey Jenkins from Monsignor Donovan at 16:00  The Heritage School took team honors followed by Trinty-Dublin.

5 girls went sub 20: with Ruthie Powell of The Heritage School put a smackdown on the field in the Girls race flying around the fast layout in 18:27 winning by :45 The top 5 included: Angela Dale of Holy Spirit(19:22), Mary Alice Smoot of Valwood(19:35), Mary Glassman of Monsignor Donovan (19:53) and Ashley Wood of Heritage(19:57) Mount De Sales won the team title by 4 points over The Heritage School and were led by the 7th place finish of Jessy Tallant.

Way down South near Lake Seminole (watch out for those 12' gators) in Bainbridge the best squads in South Ga faced off and junior Chase Harris of host Bainbridge showed the field his back from the start before disapearing winning impressively in 16:14 leading the Bearcats to the team title. Worth County placed 2nd followed by Thomasville. Paige Braswell of the Lady Bearcats won as easily as Harris did on the Boys side clocking a 19:55 for the Overall title. Thomas County Central took home the Girls team title.