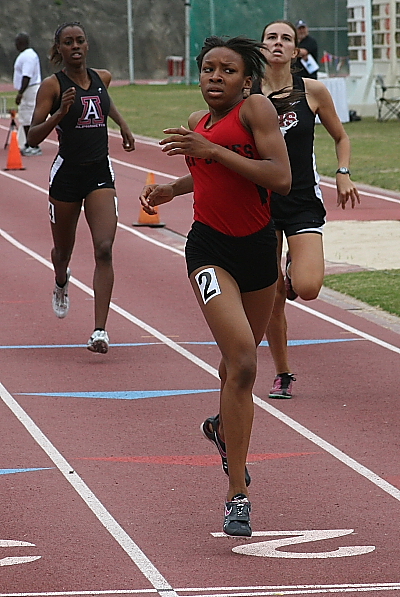 Westlake marked their territory in the 4x100m relay with a captivating performance of 45.92 (45.79 prelims) capturing the Top Performance of the meet, then their pesky B squad held on for 2nd giving the Lions 18 fatal points, well on their way to their 72.5 total for a 30 point margin of victory. The rest of the day was a Lion hunt as Shakara Martin swept the 100/200 clocking a 11.77 (-3.0w) and with no wind blazed to a 23.93 200m besting Malayshia George of Mill Creek. Jennee Williams placed 4th in the 200 for Westlake. Ariel Terrell chipped in with 4th (400m) and 6th (300h) places, Westlake was cruising in the 4x400 relay but McEachern wanted it more passing them the anchor lap for the Gold in 3:45.16 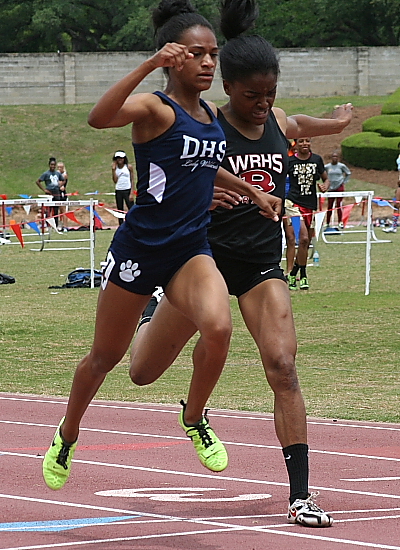 Lauren Jackson outleans Asha Stegall at the line for the 400m title  Image by ga.milesplit

Dunwoody busted out of the gate charging to a championship placing 3rd the 4x100m behind event winner MLK (47.13) and North Springs. Lauren Jackson scored 20 individual points beginning w/ the 400m Gold overtaking defending champ the final 10 meters in 55.09 and was strong enough to double in the 800m clocking a 2:14.83  Erica Banks scored 10 points in the short sprints placing 3rd in the 100/ 4th in the 200m. The icing on the cake was a Gold  in the 4x400m in 3:49.41. Kell's 5th place finish in the 4x400m gave them a 2 point margin over Miller Grove as the Horns took 2nd place team honors. It certainly didn't hurt that Kendell Williams added 10 hurdle points and on the 3rd leg of the relay passed 3-4 runners after a miscue on the first pass had dropped Kell into last. Miller Grove's efforts were bolstered by a pair of 2nds by Tatiyana Caffey in the 800m and Tiffany Flynn in the 100h. MLK placed 4th edging NS Warner Robins as Jada Martin tallied 18 points. Martin placed 2nd in the 100m (11.77) behind champ Cassondra Hall of NSWR (11.66), but got some payback in the 200m using her experience to overtake Hall seizing 1st clocking a 23.88  Morgan Hubbard of Heritage clocked a 43.84 in the 300h for the Gold. Ashley Stegall of Warner Robins also got a 3rd in the 200m race. 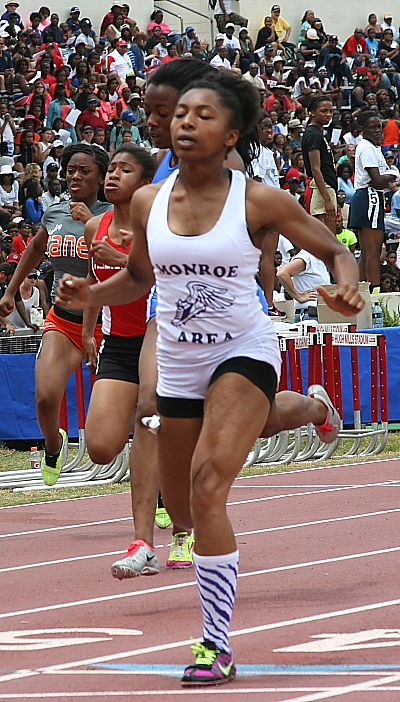 Monroe Area's Javianne Oliver was too fast doubling in the 100/200m   Image by ga.milesplit

Marist had to take advantage of the few scoring chances available in Finals to hold off Redan's express and the War Eagles prevailed scoring 13 points sealing the title with a 5th place finish in the 4x400 relay. Crystal Gray raced to the 400m title in 55.85 for Redan and Shaquilla McLain picked up 10 points in the hurdles races to spur the Raiders efforts. Rutland was 3rd place on the Podium and there was a 3 way tie for 4th between Monroe-Albany, Fayette County and Shaw at 34!

Javianne Oliver of Monroe Area was untouchable closing her sparkling HS career with worthy sprints double winning the Top Performance award in the 100m (11.61 prelims) and 200m (23.75p) Devonna Hall of Eagles Landing ran a captivating race in the 800m taking a big lead of up to 30 meters on lap 1 and was strong enough for the victory crossing the line in 2:15.01  Anasterasia Terrell of Howard (High point winner) completed a rare triple clocking a 14.31 for the 100h title. Rutland's Adriunna Brown won the 300h in 43.31 holding off Monroe-Albany standout Chakeriah Fletcher at 43.41  Shaw's relay squads scored 18 points, coming from behind taking the 4x400 (3:50.60) and placed 2nd in the 4x100m. Sandy Creek started their day off winning the 4x100m in 47.67 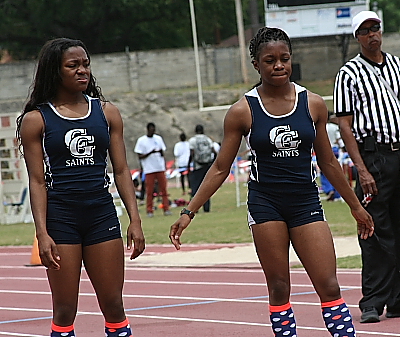 Kayla and Christian Prior scored 47 leading Cedar Grove to the 3A itle   Image by ga.milesplit 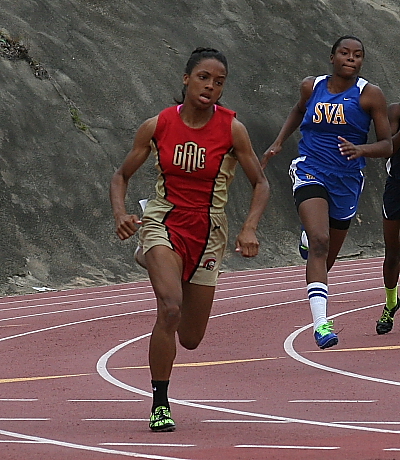 Malieka Slayton  of GAC eyes the finish line enroute to the 2A 200m title  Image by ga.milesplit

GAC made a serious run at Westminster on Saturday scoring 44 points, winning the 4x400m relay, but it wasn't quite enough falling 2 points shy of tying for first as all Westminster had to accomplish was legally getting the baton around the track going 1 place better taking 7th sealing a team championship for the Cats. Westminster had 7 chances to produce during Finals w/ distance again a huge factor as Sahara Fletcher ran on an island cruising to the 800m title in 2:16.56 and training partner Lexy Rouse placing 4th (14 points) The Cats also placed high enough in the relays, sprints, hurdles for an additional 16. GAC's Malieka Slayton doubled in the 100/200m races clocking 11.99/24.58  Wesleyan at 3rd and Lovett completed a Private school sweep of the Podium spots for teams. Laney was the top public school with 28. The DQ in the 4x100m prelims will haunt GAC for a while..Timerra Hardy from Hapeville Charter ran to her potential winning 400m Gold in 58.06 besting 300h titleist Khadeja Jackson from Lovett who placed 2nd. Jackson clocked a 45.46 in the 300h race. In a weaker than usual field, Samone Burger of Dublin placed 1st in 15.35  Laney pulled off the win in a depleted (thru DQs) 4x100 race at 49.25 nipping Early Co at the line. Jasmine Youngblood placed 2nd in the 100h for Laney. Ellen Powell from Bleckley hung close enough to the lead in the 800m race to seize a Silver medal in 2:22.02 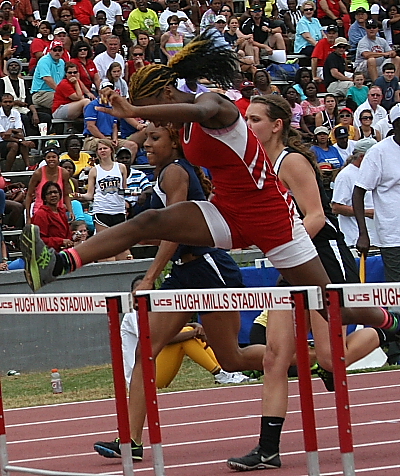 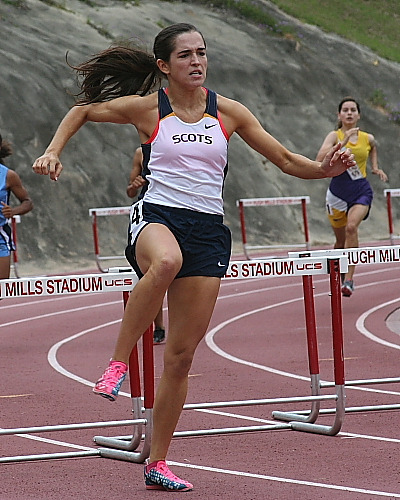 Maddie Felts of Galloway scorched the field in the A Pvt 300 Hurdles in 44.22   Image by ga.milesplit

Our Lady of Mercy put an end to Athens Christian's title run scoring 68 points, dominating the Sprints and Relays. Mercy picked up a trifecta of Golds and Silvers clinching the title as when speedster Leah Banks won the 200m clocking a 25.59  Banks placed 2nd in the 100m and was the leadoff runner in Mercy's relay wins. Morgan McClure was key as well securing a pair of deuces in the 400/800m races. A very young ACS squad clawed its way to 2nd scoring 19 points Saturday with the Relays and 100h being key as Madison Mitchell placed 4th. Holy Innocents was superb on Day 3 placing 3rd overall at 48, followed by Whitefield with 41.

Chelsea Zoller from Holy Innocents pasted 18 points on the old manual Albany Leaderboards (which I must comment, they did a much better job of being current than ever before..) I know Phil could display these digitally as well if requested, hint, hint) Zoller came back to win the 400m in a fantastic race clocking a 56.63, and ran tough taking Silver in the 200m. Maddie Felts uplifted the Scots' spirits easily winning the 300h in 44.22 after placing 3rd in the 400m  Other Gold medalists were Marquita Daniels of SWAC in the 100m (12.52), Jade Davis of St. Francis in the 800m (2:20), Randi Bohler of Holy Innocents in the 100h at 15.25  Whitefield also placed 2nd in both relays pushing them up the board to 3rd.