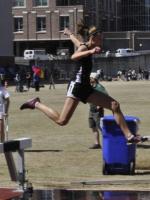 Ga.MileSplit Track & Field Athletes of the Week 4/1 - 4/6
It was Spring Break for the majority of schools this past week thus not as many meets were on the Calendar. However, there were some awesome Individual performances headlined by the All Class selectio...
Ga.MileSplit Track & Field Athletes of the Week 3/18-3/23
It was a challenging week of nasty, wet, windy and cool weather that had several meets cancel their Invitationals but student athletes managed to perform despite the conditions setting new personal be...
Team Georgia Foot Locker South Selections...
CONGRATULATIONS Georgia on another outstanding year of Cross Country.  For the 10th year in a row the Atlanta Track Club has continued its generosity with youth athletics and has agreed to sponsor TE...
GHSA Class 2A,3A,4A,5A,6A XC State Championship Preview...
This season, the course at Carrollton has ran slower, and may have been lengthened a few meters which should favor the &#39;strength&#39; runners. At press-time, it has been discussed that mats may po...