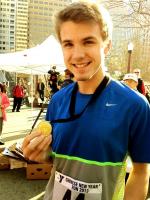 6A Boys- Marietta Rules Team Race, Stockwell Races To O...
You had to be there and watch the setting and atmosphere change as 4A began to race and the 6A schools and their rabid fans begin to arrive and populate the surrounding start/finish area and line both...
Cherokee County Varsity Races ReCap...
It was a tremendous race today at Boling Park, the location of the Cherokee County XC Championships the last 4 years. The 6 teams of Cherokee County lined up eager to take home the championship trophy...
Cherokee County Meet Preview...
Last Fall Owen Bailey of Woodstock kept Etowah from the complete sweep at the Cherokee County Championships.  His victory in the Boy&#39;s Varsity was the only blemish Etowah had on either gender and...
11th Annual Darlington CC Festival Preview...
33 High School and 31 Middle School squads will line it up Saturday morning on the campus of Darlington to do battle at the 11th Annual Darlington CC Festival. The festival was the brainchild of depar...
Warpath Invitational- Blazing Times Rule the Day...
Warpath produced some blazing times this morning with many teams finally running a cooler morning race. It was very humid, but teams couldn&#39;t complain as there was cloud cover all day, including t...
Warpath Invitational Preview...
Warpath looks like an interesting meet even with a few teams not running their varsity. On this quick course where only two have broken 15:40, Logan Poteet will be trying to reset his own course recor...
Marist Girls Dominate, Etowah Boys Claim Narrow Win at ...
At the Coach Roy Benson Double Dip Invitational a few teams bared their fangs and showed how good they can be this season. Marist&#39;s girls as usual were too deep and strong winning by 49 points wit...