2020 was a year like none of us have ever experienced before and hopefully... will never have to go through again. COVID-19 left a wake of loss and wreckage in its path that still has not ended. Everything was rolling along just fine during January and February as far as the majority of the country was aware of. 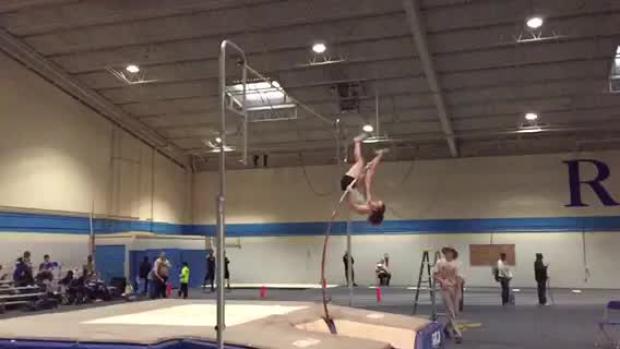 Although Georgia has no 'official indoor season, there are up to around 10-12 big meets held in Alabama at the great 'Crossplex' facility. Clemson routinely has a couple of meets each Winter, along with the facility at USC (South Carolina). North Carolina hosts many events at JDL Fast Track in Winston-Salem. Tennessee has indoor meets at Vanderbilt and East Tennessee State, and Kentucky hosts the UK Invitational. Riverside Military in Gainesville once again successfully hosted three Indoor meets in a facility that was not designed to host such an event. 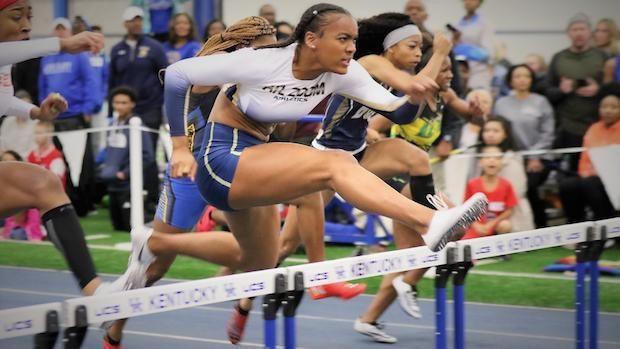 Jasmine Jones was 2020 Gatorade Georgia track athlete of the year (photo by MileSplit.com)

We had several national-caliber athletes that had prepared all winter to compete at Indoor Nationals at the famed Armory complex. On the girl's side were Jasmine Logan, Trinity Rossum, Trinity Price, Kimberly Harris, and Jasmine Jones, and for the boys Myles Collins, Graham Blanks, Sully Shelton, and former Georgia track star Jaylen Slade. And then the bottom dropped out on 3/11/20 when it was announced Indoor Nationals was canceled.

A month earlier the 2020 outdoor track and field season had begun in Georgia and a few other of our southern neighbors, notably Florida, Alabama, South Carolina, and Texas were full speed by mid-February. Our onsite coverage ran into a few roadblocks until the big Archer event but began to hit its stride at the end of February. 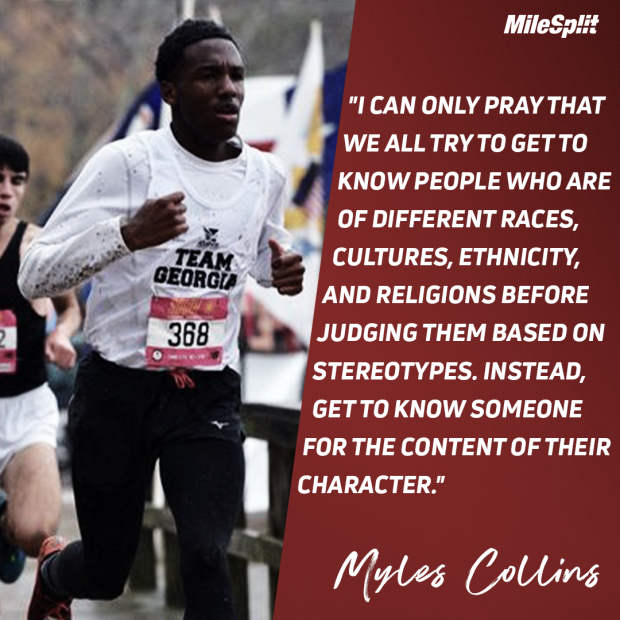 As mentioned above, almost all of our nationally elite athletes were still focused on Indoors, and all one needs to do is click on these links to the leaders in each event of the Outdoor season. Myles Collins of Archer (now at Alabama) was on an early tear having dropped low times in the 1600 meter run (4:08) and 3200 (8:57). Meanwhile, unbeknownst to the majority of us, something was brewing outside of our country. We would become very aware on March 12th...

We had just finished timing a tri-meet at Madison County early evening on 3/12. I don't watch the news much, just sports, movies, quality tv and the weather. There was a text on my cell saying turn on the news right now...My first thoughts were of 9-11, vividly recall the tragedy of that day. It was the governor of Ohio announcing school closures due to some virus. It only escalated from there. Starting with the SEC basketball tourney at Vanderbilt, March Madness, NBA, etc, etc. A 'Domino' effect was in full force. The GHSA initially announced they were leaving it to school districts to determine their status, but hours later suspended Spring Sports until 3/27 when they would meet and re-evaluate. Thinking back to that Don McLean song, 'American Pie' on 3/13 for Outdoor track it was the day the baton dropped and it could not be picked up, the music had stopped. We all know the rest, businesses closed, shutdowns, paranoia, school facilities locked, fences to tracks, stadiums locked. Nowhere to practice, competition not allowed, no team practices coaches with no team or athletes to coach. An uncertain future ahead, only online schooling to finish out the term.

Think about how many hard-working seniors who were integral parts of their team's program, motivators for the underclassmen, not able to contribute to their team's success. Not having one more opportunity to score at a region meet, earn a letter, etc... Not able to spend time hanging out with their friends, except with zoom or facetime, etc.

There were a few athletes and parents who conducted COVID-19 time trials and self-timed. Unfortunately, some locked-down facilities may have been breached to accomplish this. There was a singular trial that stood out over all of them when Justin Wachtel and Andrew Jones went sub 9:00 on the Gainesville track which was open to the public.

And what about the coaches? For some deeply invested in their love for the sport and well as being a teacher, it had to be a trying few months. Others had their means of making a living taken from them like some large timing companies. Associations like the USATF GA canceled all events as well as Atlanta Track Club and then the 2020 Tokyo Olympic Games got postponed till 2021. Summer was a bleak time except for the GHSA announcing that team conditioning could resume in June with many guidelines and limitations installed. Then it happened, the George Floyd tragedy sparking a month of protests across the country along with another spike of positive COVID-19 tests after the Memorial Day weekend, repeated again after July 4th weekend. Worries began to set in, and it was an anxious time for large invites coming up in mid to late August. It didn't take long as the Battle of Atlanta canceled very early in late June. Slowly meets began to cancel due to concerns with the virus. Through September, about 25-30 meets decided to not run in 2020. Including, Great American, Foot Locker, and NXN (Team Nationals)

But, other determined meet directors chose to continue, shouldered the burden (if not hamstrung by administration/school boards), and soldiered on helping make the 2020 cross country season a reality.  Many used the guidelines suggested by the GHSA, some even taking it farther to protect athletes, coaches, and fans alike! However, there were a few souls who threw caution to the winds and ran their events like it was 2019 with no social distancing, etc. in their meet info. There were some outstanding performances achieved by runners like Kamari Miller of Marietta who was untouchable till his 5th place finish at RunningLane XC Nationals. Several programs swept both boys and girls titles like Marietta HS, St. Pius X, Westminster, and Wesleyan. But, we made it through region championships and had a very safe GHSA state meet, although many were upset by the awards 'Podium' ceremonies being scrapped for safety issues. It also was difficult to keep parents/fans separated from the athletes at the chute exits after a race was completed, though it was stressed over the PA over and over. I want to thank everyone, coaches, athletes, fans, and officials who did their part to help make the 2020 cross country season safer. We are not done yet though, let's keep our guard up, we have lost people in the running community and there is really no way to gauge how many may have contracted the virus at a meet. I personally know three timers who tested positive, one of them a close friend. Based on the most recent data from John Hopkins University we are far from out of the woods with COVID-19.