Archer's Boys defended their home turf and established themselves as a podium contender at Berry in early May winning the team title by 24.5 points over runnerup Allatoona. Coach Kasson commented, "Our Boys were fantastic today! We had several kids run, jump, and throw PR's and for this early in the season that is extremely encouraging. We accomplished what we wanted to accomplish and that was defending our title here against the best programs in the state. We had some mishaps for sure in some of the relays and in the women's 100m, running with new groups of kids and experimenting here and there but that is all correctable. That is why we do this, to throw the kids into the fire right away to sere what we have. I couldn't be more excited about the season to come...

I was extremely impressed with the Marietta Girls. Sterling is such an amazing athlete and she showed everyone here today what type of season she can have. I thought GAC, North Springs and Shiloh were fantastic as well. Coach Jones, Coach McKay, Coach Carroll and all of those guys always have their kids ready to compete and this year was no different.

Elijah Godwin pulled away the final 200m with a nice early season race taking the 400m easily at 47.84 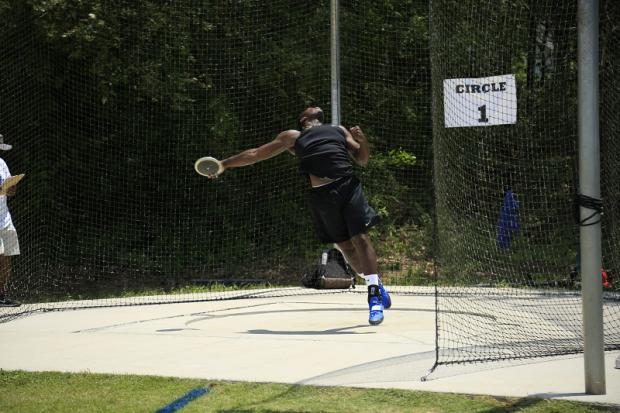 Jeremiah Pierce from Carrollton was the star on the field, winning the Discus with a nice toss of 171-0(file photo)

Marietta began their campaign for a Girls Track title with a 22 point margin of victory over perenially strong 6A North Springs. Multi-events athlete Sterling Lester, well, had herself a sterling outing for the Lady Blue Devils, tripling in the 200m (24.17,-seen above) the 200m dash (24.17) and a winning bar of 5=6 in the HJ.

Elizabeth Funderburk of Colquitt (FSU signee) made the long trip from down in Norman Park (a sleepy little town) and swept the Girls distance events, taking the 1600m (5:08) and earlier the 3200m going a GA Outdoor best 10:33.