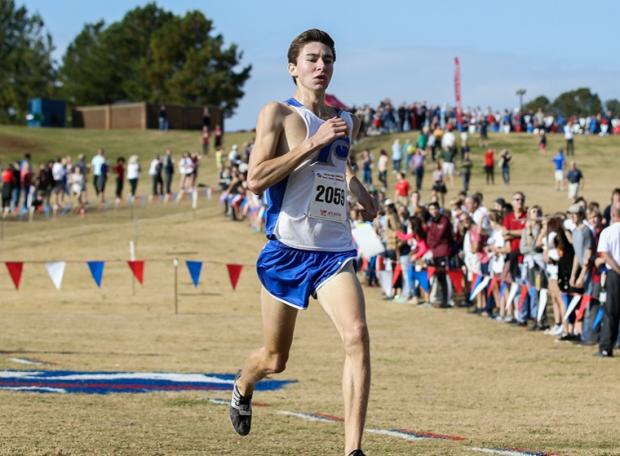 It has been 2 years, but Griffin McCauley has come full circle now and faster than ever, as he held off valiant challenges by running buddy, frosh Zack Truitt of Landmark Christian the entire race, and a big late challenge from Whitefield's Devin Wade. McCauley led from the gun and exchanged the lead with Truitt a few times while Wade lurked 10m back until the final 400m. McCauley led up the final big hill pulling away from Truitt, but Wade went with him almost pulling even at the crest, when Griff dropped the hammer, creating about a 12-15m gap and raced thru the finish line going 17:02. Wade hung tough taking 2nd at 17:04, with Truitt 3rd at 17:09. Graham Blanks of Athens Academy was in that chase pack the entire race, and hung around for 4th overall at 17:13.

Hebron Boys brought it when it mattered, taking A Private Boys team title by 32 points over 2016 Champ Landmark Christian. They were really fired up just before the gun doing their pre-race team cheer and felt confident going into the race. The Lions roared to the mild upset, with their depth being key at 4-5 runners. Brandon Potra and Ethan Selph who placed 6th and 7th respectively at 17:34/17:35. Also having key performances were Blake Fugel (12th-18:02) and Preston Brown (15th-18:12).

Landmark Christian is a tiny school, and its amazing how they can produce state championship caliber squads in A Private year in and out. Strong from 1-3, led by Truitt in 3rd, and fellow all-staters Kameron Jackson (8th-17:42) and Jack Drury (10th-17:49). 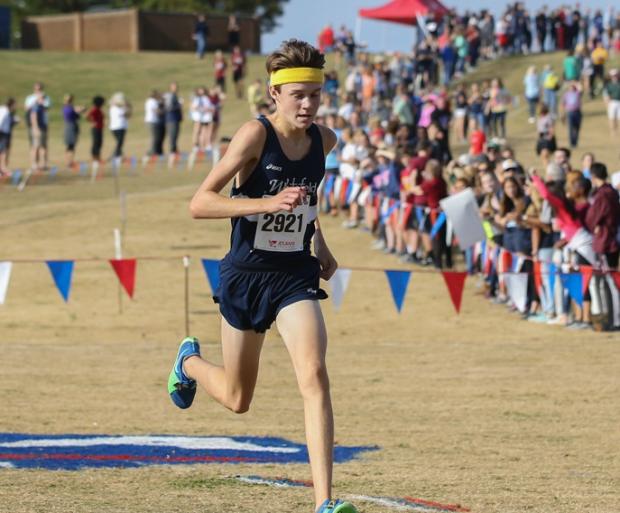 Whitefield Academy  had a nice race taking the 3rd Podium spot 10 points behind runnerup Landmark. Wade did his job upfront taking 3rd, but their 2-5 did the heavy lifting with a Split of :50. Wesleyan missed out on the dance in 2016, but came back strong (especially in October) as the Wolves scratched their way to the 4th and final team podium slot. Leading the hungry pack was Mac Howie with an 11th place finish at 17:58. Also making the All-State squad not mentioned above were Alex Van Schoor of Galloway (5th- 17:32) and Ryan Iyer of Athens Academy (9th-17:44) 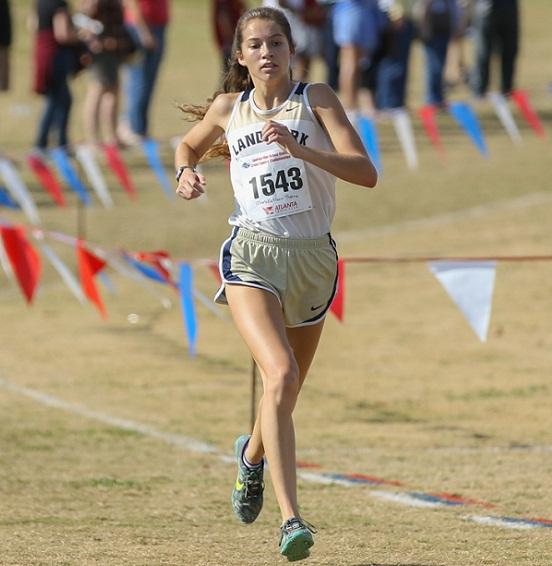 The Girls team race was alot closer than many anticipated proving that 5th runner can make or break you at State. Luckily for Landmark Christian, it was make today as Jenny Goodwin's 46th place finish at 23:53 was good enough for Landmark to make it 4 straight team titles in A Private. That makes it 10 in the past 14 years, many times with only 5 girls. Mary Kellison Thorne has taken over the #1 spot the past 3 weeks, and confidence can be a big factor at State races as Thorn cruised around the course, (unchallenged on loop 2) and crossed the mats in a winning time of 19:33. Also earning All-State honors were Erin Fegans (6th-20:08), Sarah Foreman finished on a broken foot on the final downhill (7th-20:10) and Lindsey Biggar (8th-20:58).

Reagan Mahoney from Atlanta International qualified as a top 6 Individual at Area 3, and made the most of the opportunity taking runnerup honors at 19:45. Sophia West of Paideia, had her best State race of her career taking 3rd overall in 19:58, after moving up 3 spots on loop 2.

Holy Innocents made a real race of it for the team title coming up 9 points short of champ Landmark. Jackie Addy led the Golden Bears efforts placing 4th overall in 20:03. But, key was Holy's 2-5 runners who had a Split of 1:15 with Hayden Puitt leading that bunch in 14th place. Athens Academy secured the 3rd team podium spot scoring 115, led by Anna Marian Block's 5th place finish of 20:07. Wesleyan outraced Area 2 champ Providence Christian for the final Podium spot by 10 points. The Lady Wolves did not have a front runner, but their 1-5 had a Split of 1:34 .. Jennifer Woollery  placed 9th for Providence going 21:01 and Emily R. Little of Whitefield claimed the 10th spot on the All-State squad posting a 21:06.