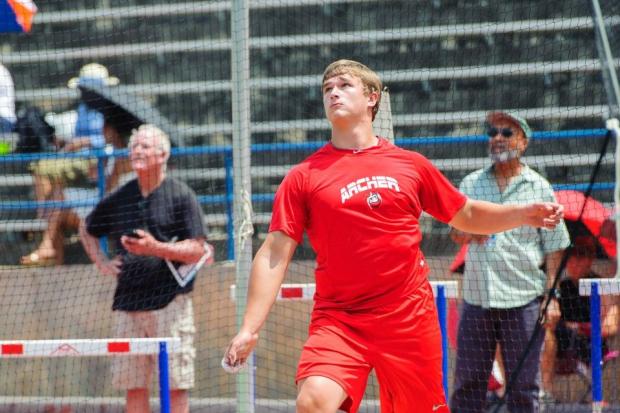 (more pics to be added)

Ryan Camp of Archer wins the Discus with a huge toss of 194-0 with Isaiah Rogers of Campbell taking 2nd at 167-11.

Isaiah Rogers also sets a new 6A meet record in the Shot Put with a toss of 67-10. Samuel Wright from Archer takes Silver with a mark of 64-2.50.

Jeremiah Bridges of Hillgrove took a narrow victory in LJ going 24-2.50 over Sam Jackson of McEachern at 24-1.

3 men had bars of 14-0 in the PV, but Koby Cormier of West Forsyth prevailed on a JD. Tying 2nd were Alex Bassett of Mill Creek and Mason Lord of Lambert.

Jeremiah Holloman got Newton's title hopes rolling winning the TJ with a mark of 49-5.50. Cedric Williams of McEachern took the Silver with a leap of 47-10 and John Anthony of Chattahoochee HS placed 3rd at 46-0.

It was tight in the 6A HJ but prevailing was Antuane Dennard of South Gwinnett on a JD at 6-6. Quentin Campbell South Forsyth took 2nd and DeAndre Beal of Hillgrove was 3rd at 6-4.

AAAAA- Denzel Harper of Stephenson began his medal quest, taking Gold in the LJ with a leap of 23-4. Jaysen Robinson of North Springs placed 2nd with 22-10 and Jarvis James of Woodland was 3rd at 22-8.

Ervin Nard from Ware County won an intense Discus battle with a toss of 166-5. Tanner Holcomb from South Paulding won the Silver with a mark of 160-4 and Spiecha of Starrs added 6 more points for Starrs in 3rd at 159-6.

Rogerious Swain got Podium contender Cedar Shoals off to a good start, winning the TJ, despite fouling thrice, with a bound of 47-3. Drae Butts of Jones County placed 2nd an inch back at 47-2 and Tariq Bradford got SW DeKalb rolling winning Bronze at 46-10.75.

It was tough going in the 5A HJ after all the delays, but Jamaine Chambers of Dutchtown seized the opportunity winning on a jd at 6-4. Placing 2nd was James Williams of Lithia Springs and taking the Bronze was Tobi Adeyeye from Allatoona (6-2)

AAAA- In a very competitive Discus competition, Akelies Leroy of Monroe Albany seized the Gold with a nice toss of 165-1. Jeremiah Pierce of Carrollton was a close 2nd at 164-8 with Michael Willingham of Arabia Mountain 3rd at 158-4.

Ratayvius Jackson got Eastside 'movin on up' the board, winning the HJ clearing 6-8. Marcus Cade of Thomson took Silver on a JD at 6-6, followed by Luke Johns of SE Whitfield.

Ratayvius Jackson does it again! This time winning the TJ, with a mark of 46-3.75 over Tyler Jones of Arabia Mountain, who leaped out to Silver with a mark of 45-10.75. Dwayne Watkins from Woodward took 3rd at 45-2.

Marcus Cade of Thomson spoiled Jackson's quest for a 'Triple' in the LJ, with a winning mark of 23-1.75. Jackson had to be content with Silver (ending his day scoring 28 for Eastside) with a mark of 22-11.

Scott Simpson of Woodward Academy took the PV crown with a bar of 14-6. Joe Street  from Carrollton took 2nd at 14-0 and Peyton Caudle from Upson Lee nabbed the Bronze on a JD at 13-6.

AAA- Qwazon Alkhaliq of Maynard Jackson did not disapoint, as he easily won the TJ competition with a mark of 48-6.50 on his first attempt, good enough that he passed on his last 4 attempts, saying beat that fellas! Carlos Ferguson of Central Macon gave it a whirl though placing 2nd at 46-2.25. Mecole Hardman from Elbert placed 3rd with a mark of 45-5.75.

Jack Cahillane of Westminster scored PV Gold in a mild upset with an excellent bar of 15-0. Mitt Conerly of Central jumped to 2nd place at 14-6 and Kayne Berryhill from nearby Banks County rose to 13-6 for 3rd place.

Tyler Blalock from Cedartown exploded a 59 foot bomb to seize first in the Shot. Johnny Thomas of Cedar Grove settled for Silver at 53-0.50 and Trey Teasley from Hart County stole 3rd with a toss of 50-0.50.

David Harris from Tattnall County won the HJ with a clearance of 6-6. Placing 2nd was Deontae Jackson of Ringold who took 2nd on a JD at 6-4 and 3rd was Adam Ingram from Pickens County at 6-4 on a JD.

Donte Wilson gave the home crowd something to crow about winning the Discus with a mark of 153-0. Kearis Jackson from Peach County scored the Silver medal at 151-3, while Jayson Cantrell from Adairsville snuck in for 3rd at 137-10.

Darrell Baker from Hephzipbah took a surprise win in the LJ going 23-7.5. Hardman of Elbert added a Silver medal to his bag at 22-8 and Qwazon Alkhaliq was a 1/2 back to secure 3rd place.

Williams of Early saved his best for his last attempt in the TJ blowing out a mark of 49-4.50 bagging another Gold medal. Vidalia continued to amass points with Shon Jones taking 2nd place at 47-0.50 and winning a bronze medal was Xavier Bailey from Coosa going 45-0.25.

Jordan Mack got the Wolves of Wesleyan in the hunt taking HJ Gold with a bar of 6-6 and team mate Jalen Hodges added 8 big points also clearing 6-6. Elliot Moses from Early won Bronze on a JD at 6-4.

Charlie Woerner from Rabun County slung the Discus 158-2 winning a Gold medal for the Tiger faithful in attendance. Hunter Sanek from Temple HS had a mark of 150-8 placing 2nd and Nathaniel Oliver from Macon County had to settle for 3rd at 150-2.

Chandler Eckler from Fitzgerald equalled his pr clearing 14-0 which was good enough for the Gold Medal in the PV. Will Simmons from Bleckley County added 8 points for the Royals at 13-6 and Dalton Keener from Rabun County cleared 13-0 taking 3rd on a JD.

A Private- Kevon Hudson of Prince Avenue had a big upset in the Long Jump going 24-1.25 beating top ranked Demetris Robertson from Savannah Christian at 23-4.50. Zafir Abdul-Salaam of WD Mohammed had a nice series taking the Bronze at 22-2.

Drew Anderson of Landmark Christian pulled an upset in the Discus striking Gold for the favored Eagles with a mark of 165-0. Robby Watson of FPD had to settle for 2nd place a few inches back at 164-4. Reed Kroeber of Fellowship Christian  was 3rd place at 143-3.

Josh Miller of FPD won a close PV competition with a bar of 14-0. Sam Zoldock of Mount Pisgah took a surprising 2nd on a JD at 14-0 and Stockton McGuire helped Landmark continue to pile up points on the Field getting 3rd place.

It was tough going in the HJ today for everyone but Harrison Mansell of Fellowship Christian who had a winning bar of 6-4. Brandon Selders of Calvary Day won on a JD at 6-0 over ACS's Richard Jubinor.

Robby Watson got some payback winning the Shot Put with a mark of 53-7.5. Ahmir Lee of Mt.Vernon Presbyterian took 2nd at 51-11 while Drew Anderson added 6 more points for Landmark going 3rd at 51-4.50.

Quintez Cephus of Stratford Academy lived up to top billing winning the TJ with a leap of 45-1.75. Caleb Cobb added a Silver for Landmark taking 2nd at 44-10.50 and Kaleb Bryant of Athens Academy placed 3rd with a mark of 44-7.25.

A Public- Its no surprise that some A Public guys really bring it at Georgia Olympics as Malik Lender got Montgomery County off to a great start winning the LJ with a mark of 23-1.50. Robert Cornelius from Twiggs County placed 2nd at 22-6.5 and Rashad Jordan of Drew Charter took 3rd 22-2.25,

Renault Griffin from Greeville easily won the HJ as expected going 6-8 for the Gold medal. Kevin Mills of                Treutlen leaped 6-4 for 2nd and Tamorrian Terry from Turner County went 6-2 good enough for the Bronze.

Mt Zion Carrollton swept the top 2 spots in the Discus behind Antonio Brown who won Gold with a mark of 129-5 while team mate Daniel Anderson was 2nd at 126-1. Jacuri Williams was 3rd place with a toss of 124-7.

Adrian Vaquera of nearby Commerce took the Shot Put with a throw of 46-6.50, Richard Farley of Mt.Zion was 2nd at 44-2 and Michael Dasher from Charlton County (near Okeefenokee Swamp) took 3rd at 43-8.

Ladarus Lundy from Hancock Central won the TJ with a bound of 44-0.25, Ontaria Wilson from Turner County sliced to a 43-10 good for 2nd and Benjamin Okafor of Elite Scholars placed 3rd at 43-9.75.