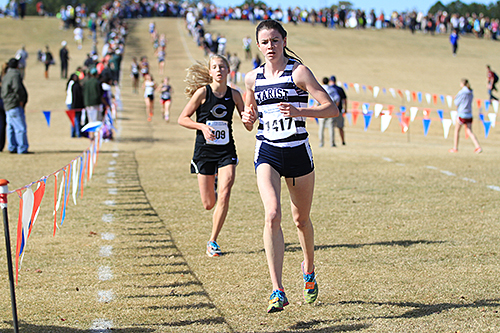 There was plenty of tight racing for the final 3 Podium spots with a mild upset pullled off by a former team champ.  For the team battle there was never any doubt Marist was the class of the field. Scoring just 20 points is incredible. But what really made it exciting was watching the other Marist girls work their way ever closer to Jenna Gearing of White County who is a fantastic runner. To place 3 runners in front of one of the best girl athletes in the state is quite an accomplishment, and what a kick by Caitie Faust down the stretch!
Individually there was not much movement in the rest of the top 10 contenders as the places were mostly decided by the halfway point and runners held their positions.  However,  the race behind them was very exciting for the next 3 Podium spots... Heritage-Catoosa had got out quick and looked like they were attempting to go after Marist,  which became a mistake as the race progressed. The well schooled  St. Pius X gals seemed to have a strategy brewing, sitting back making their move during the second half of the race. Despite their top runner fading a bit (Entrekin), the Golden Lions got great moves from their 2-6 in the final mile including  today's lead runner Katie Glenn, Emma Jane Braxton and Mary Hathaway Lemmon, and it was enough to push them past Heritage Catoosa into 2nd place as a team. White County and North Oconee continued their regular season and region battles with a great duel down to the wire for the final trophy as White again came out on top by 9 points. Buford was a very respectable 6th so congrats to Coaches Borg, Moore and Eager from those 3 schools.
Rounding out the 4A Girls All-State team were:
Jenna Gearing of White County (4th in 19:26)
Lindsay Grater of Chestatee (5th in 19:55)
Emily Poole of Heritage Catoosa (6th in 19:58)
Tiffany Mountin of Perry (8th in 20:17)
Betty Jackson of Eagle's Landing (10th in 20:32)
Coach Eric Heintze of Marist:
"It was a magical day.  This group of kids truly loved each other and ran for each other and it showed.  The Girls and Boys came into the meet in very different situations.  The girls an overwhelming favorite and the boys a huge underdog; however, they both trusted the plan and executed it with precision.  They are incredible.  To see the girls finish and then hear the boys scores it was a magical 10 minutes, period.  Morgan was awesome and very impressive.  She was tougher than ever today.  Josie and Caitie believed they could go 2-3 and they did.  Kendall had a bad cramp and pushed through while Emily came up big.  Marlaina and Myriam ran great to finish 11th and 16th.  It will be hard to replace five seniors but this was a special group."
Tweets by GAMilesplit