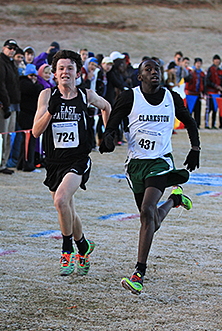 Individual Race
It was if someone had shot Logan Poteet out of a cannon as he jumped out quick at the gun dispatching the few hardy fools who ran the first 300 meters like it was a 40 yard dash at a NFL combine. He had already assumed a hefty lead as he flew down the first long downhill before the twin street crossings and created enough separation between Mustafaa and Lakeside Evans' Allan Clark to maintain a comfortable margin of victory in 16:14 defending his 5A title. Meanwhile, Mustafaa and Clark were engaged in a furious duel until the finish with Hakeem's better footspeed aiding him when needed most crossing the triple mats at 16:28 for Overall runnerup with Clark a few strides back at 16:30 for 3rd.
Team Race
The 5A Boys team race turned into a race of 'Clarkston against the world' as the Angoras stuck enough guys into the top 23 team spots along with their depth from 5-7 to rise up and ascend the Podium as team champions winning their first State Cross Country title in recent history. The race against Forsyth Central never developed as the Bulldogs were out of of it early, their 1st runner crossing in 26th place. Instead it morphed into (not surprisingly) into a real battle with a Flowery Branch squad that pushed the Angoras to the limit.  Jake Shewbert struck first for the fierce Falcons placing 4th overall in 16:37.  Abbas Abbkar then countered taking 6th in 16:38. It continued to be a see-saw battle when Clarkston struck again for 14th by Gidey Sahlu posting a 16:57 and Flowery's Grant O'Callaghan countered in 15th at 17:06..It continued to very close as Clarkston went 21, 23, 41 and the Branch 22, 31 and 40. So ultimately Clarkston's 4 (Awet Fitwi) provided the margin of victory as everyone else was a position apart from their counterpart.   Clarkston had a wild celebration on the steep hill overlooking the main start/finish area which was enjoyable to watch (after the awards presentation)
Flowery Branch coach Jimmy Sorrells commented, "Our only two returners  were Miguel Martinez (Senior) and Jake Shewbert (Junior) from last year’s team. We were lucky to have Miguel back. He was nowhere close to last year’s 9th place finish at the 2013 State XC Championship. It took him a good bit of time to recover from a stress fracture he suffered at the Track State Championship. His first race this year was the Wendy’s Invitational on October 4th. Jake was extra focused this year because of the unfortunate turn of events at last year’s State meet when he was shoved into a tree shortly after the mile!  Although he finished last year’s race,  he was well out of a scoring position. I was very proud to see how hard this team worked and believed that they would be in a great position to fight for the title in the end. We have a deep respect for Clarkston and we are very happy that they were able to capture the title."
Starrs Mill was in the mix for a Podium spot after those squads claiming 3rd (as expected) led by  Joshua Warren's 12th place finish at 16:57. The big surprise in 5A Boys was Alexander racing to 4th after not being mentioned in the preview (I did not do my homework on that one) as an Alexande coach slapped me 5 in joy informing me of their placing, lol!  The Cougars ate up the 24,27, 30 spots led by Jacob Giammarco's 17:33.
Rounding out the top 10 Individuals (making  All-State 5A (not mentioned above) were:
Brennan Garriques of Creekview (5th at 16:37 leading the Grizzlies to 6th)
Christian Nix of East Paulding (7th at 16:38)
Colton Page of Allatoona (8th at 16:44)
Juan Ortega of Gainesville (9th at 16:44)
Sam Bowie of Lagrange (10th at 16:47)
COMPLETE RESULTS
COMPLETE COVERAGE
PHOTO GALLERY
VIDEO (coming Sunday night)
Tweets by GAMilesplit