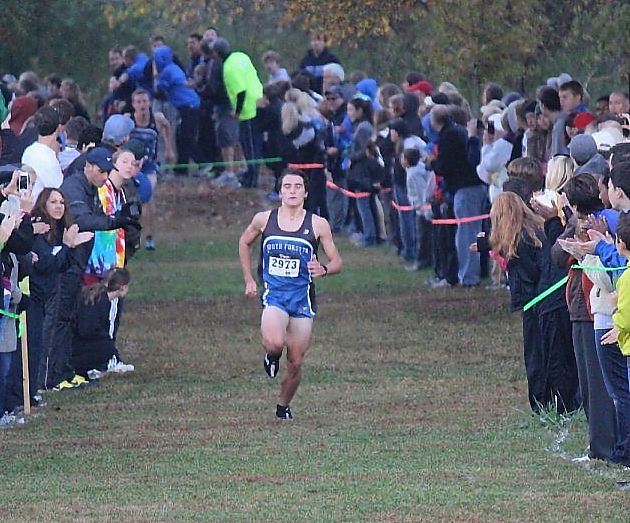 Ryan Peppenhorst of South Forsyth charges to the Finish line

BOY’S VARSITY - The one, two punch of Junior champion Ryan Peppenhorst (16:43) and Senior runner up Jake Howlin (16:48) led #10 6A ranked South Forsyth to the region 6 championship on a cool, perfect Saturday morning. South placed 6 runners in the top 15 to take the win with 33 points, besting runner up West Forsyth by 15. South moves on to the state meet having not lost a team competition to any other school in the region. With only one senior on a top 7 roster that features an unheard of 4 freshman, South will be a team to watch for the podium at Carrollton in years to come. West qualified for state for the 1st time in the school’s 7 year history, putting 5 in the top 15. West’s senior laden squad took 2nd in large part due to an enviable 1-5 split of only :16. Lambert (88 points) and Centennial (100 points) rounded out state qualifiers for the region. Senior Erik Olsen of John’s Creek placed third to capture an individual qualifier spot.

GIRL’S VARSITY - Had Vegas been running odds on this race in advance, they would have had a hard time picking between #10 all class/#7 6A ranked Centennial and #10 6A South Forsyth (#2 all class 19:06 average based upon blazing fast performance at ASICS) who had yet to meet head to head in 2013. Previously ranked West Forsyth, who had lost by less than 10 points to South in 3 previous meetings and Lambert also had credentials to be in contention. 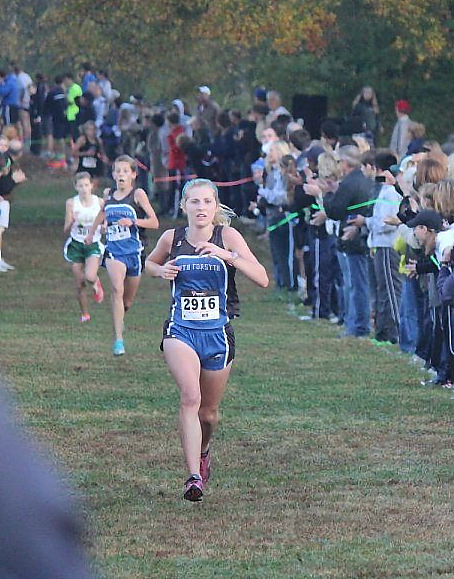 Like the boy’s varsity race, South Forsyth runners finished 1st and 2nd overall giving the early advantage to the War Eagles. Sophomore sensation Savannah Carnahan, who has finished no worse than 3rd in each of her 8 outings in 2013, won the first, of what we suspect will be many, region titles in 19:11. Savannah’s freshman teammate Millie Bergey (a 5:30 middle school 1600M performer), made a late charge into 2nd, closing to within 2.5 seconds of 1st. Freshmen made up 5 of the 1st 8 positions as West Forsyth’s Julie Ericson took 3rd in 19:16, Maddy Petersen of Centennial 4th in 19:22, West’s Liz Galarza 7th in 19:51 and Lambert’s Mae McKenna 8th in 19:58.

The team battle was tight enough to have coaches frantically doing their own math prior to official results being posted. The Lady Knights of Centennial solidified their ranking, taking the victory with 48 points, with a 20:01 average / 1-5 split of 1:09 & putting 4 runners in the top 15. Like the Boy’s race, West Forsyth finished in the runner up position by an ever so close two points. The Wolverines also placed 4 in the top 15, had a 1-5 average of 19:57 and 1-5 split of 1:22. South Forsyth with 83 points, held off an improving Lambert squad for 3rd. Region 6 sends 4 battle tested teams into what should be an amazing 6A girl’s championship race.

JV GIRLS - South Forsyth placed 5 runners in the top 11, led by Senior Allie Brown’s 2nd place, to win the girl’s JV title, scoring 33 points with a top 5 average of 21:49. Centennial had 3 in the top 6 to capture 2nd in 42 points and a top 5 average of 21:55. The overall individual champion was West Forsyth freshman Stephanie Shea, sister of Varsity boy’s 12th place finisher Austin, in a quick time of 20:38.