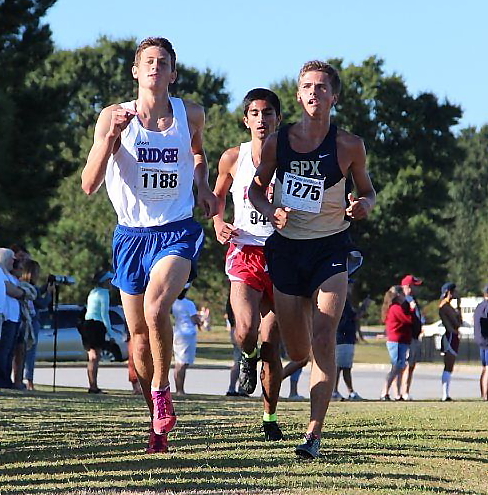 Battle of the Titans at Carrollton between (l-r) Drew Kelley of The Ridge, Sukhi Khosla of Leon and Austin Sprague Image Courtesy of  RyanOdine2

It was quite a welcome relief with the cool, breezy am weather instead of a humid sauna for all the schools coming to test their legs on the newer Carrollton layout which produced the slowest State Meet times in a decade and the Championship races lived up to their billing. But, Carrollton is running a little faster than last year with the minor changes. There seem to be fewer turns on the course, but all the hills are still there and hairpin-ish turn behind the starting line is gone. So, you still need to be a strong team to run well there.

It was a 3 man showdown in the Championship Boys race. There was a pack of 5 guys at the mile that quickly turned into 3 by the halfway point. The pace was fairly honest early, with a 5:00 opening mile. Khosla, Mills, and Sprague ran together through 2.5 until Sprague made a move  Sukhi Khosla from Leon (Tallahassee) and Austin Sprague of St.Pius looked to maybe have Kevin Mills on the ropes the last mile, but Mills hung around and outkicked Sprague. Khosla from Leon however blew them both away in the last 400. He dropped Sprague as they came across the final road crossing and went straight for the final hill, with no more u-turn taking the Boys Overall title, while Kevin Mills was the top Georgian placing 2nd in 15:58..

St. Pius moved up the second half of the race and the front runners were too strong for everybody else continuing their winning ways taking the Boys team title with 3 top 10 finishers including Sprague in 3rd at 16:02, Joseph Ferrugia in 6th and Stephen Martinez in 10th. Coach McClay commented, "Templeton stepped up for us as our normal 5th struggled (was sick) and ran just well enough to for the win as other teams were coming back to us the whole way. The patient race strategy we used at state last year paid off yet again on the challenging course" Peachtree Ridge placed a strong 2nd behind Mills' efforts and Issac Penmon's 9th and Flowery Branch proved their top 5A Ranking placing 3rd. Again they pack ran very well and looked strong the whole way, they just missed the front runners with James Slavik leading the way once again.  Auburn and Peachtree Ridge both looked strong early and were out in front along with Woodward (who was missing their #1).

The Girls race may just have been a dramatic dress rehearsal for the 6A State Championship as Peachtree Ridge barely nipped 2012 Champ Brookwood by a single point. The Broncs top 3 had the advantage, but the Ridge Girls made it up with their 4/5 runners. Addy Lippitt led the way with her 3rd place finish in 19:44  Brookwood placed 3 girls in the top 9 including Lauren Brennan who finished 5th in 19:59  West Forsyth placed a strong 3rd in team scoring. Kathryn Foreman of Landmark Christian continued to dominate every race this Fall clocking a strong 18:46, with frosh teamate Nicole Fegans placing 2nd in 19:27. Hailey Golnick of Starrs Mill placed 4th overall in 19:57