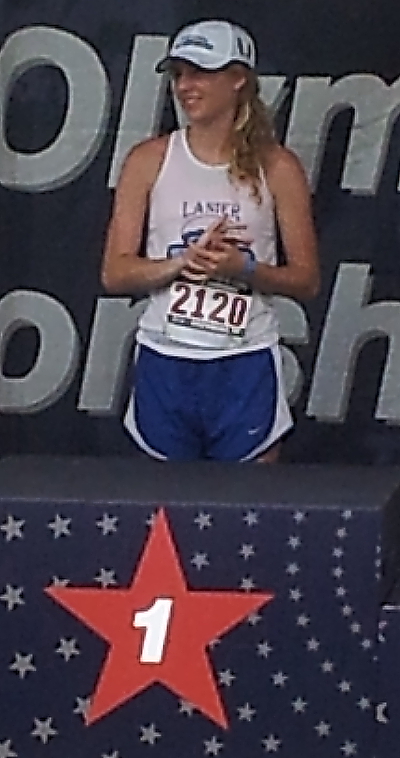 Savannah Carnahan (pictured above) of South Forsyth HS, seized a Gold medal in the Intermediate Girls 2000 Steeplechase in a winning time of 7:33.51 Savannah then placed 3rd winning a Bronze medal in the 3000 meter finals in 10:31.36

Georgia Gals from Throw1deep swept the Hammer Throw as Avana Story wins Gold with a mark of 176-11. Kelli Thomas placed 2nd at 171-06, Casidy Callahan was 3rd in 168-00 and Nyla Thomas was 4th in 163-03. In the Intermediate Girls Hammer Ga athletes Sabrina Gaitan placed 3rd with a mark of 156-11 and Kamryn Brinson 4th in 144-10. Throw1deep had another female athlete win Gold in the Intermediate Girls as Noelle Parker tossed the 4kg Shot 42-02.25

Joshua Whitener won Gold in the Young Men's Hammer Throw with a winning toss of 200-11 and younger brother Charles Whitener made the family proud also winning the Intermediate Boys division with a mark of 181-11!  Kenneth Brinson from Marist/T1d placed 3rd in the IM Boys Discus with a toss of 164-04 (all of these athletes trained by T1d's Throws Guru Mike Judge)

Kenneth Fisher became the Young Men's Champ in the LJ with a Gold Medal leap of 24-02.50 LaSheon Strozier of Lithia Springs HS leaped to Gold in the IM Boys TJ at 45-05.75! Denzel Harper of Quicksilver TC placed 3rd in the Intermediate Boys LJ at 22-07

Tachyon TC flew to Gold in the IM Girls 4x100 relay in 46.63  Relay legs were on the squad were Caitlan Tate, Venida Fagan, Serenity Douglas and Aliyah Abrams...The Sapphire-Ruff Riders placed 5th in 47.60

Juells McLeod, formerly of Henry County HS, got some well deserved redemption from the HS Outdoor season, winning the Silver medal in the YW 3000 meters in 10:30.41

Hakeem Mustafaa of Shaw HS warmed up for the upcoming Cross Country season racing to a Silver medal in the Intermediate Boys 3000 meter race clocking a 9:04.83

Darius Smith of Landmark Christian won a Bronze medal in the YM 400 Meter Hurdles in 52.89

Although having graduated in 2012, James Wenk formerly of Harrison HS, placed 3rd in the YM Pole Vault clearing 15-11

DeAndra Greer of the DC Express placed 4th in the Young Women's 100 Meter Finals in 11.832


Tia Jones of Full Throttle was absolutely the Star of the Youth Division setting not 1...but 2  NEW  USATF JO Youth Records! First by  winning the 100 Hurdles Gold Medal in 13.53 (breaking the old mark by .32) Then Tia took flight over the 200 Hurdles, adding another Gold medal destroying the old National JO meet record by .83 in 25.80...Watch out Kendell Williams, lol!  According to her 'year', Tia is only 13 years old. Jones also placed 2nd in the 200 Meter Dash Finals.

The Baldwin Jets Boys will ride back home to Milledgeville with 4 Golds as their 4x400 Relay squad smoked the field with an impressive 3:30.17. The legs were Darius and Dalvin Ruff, Evan Simmons and Keandre Bolston!

Antuane Dennard from Lawrenceville and representing the Running Mustangs, won the Silver Medal in the Boys Pentathlon scoring 2889 points. Dennard did not place 1st any of the events, but had plenty of 2nd-4ths almost pulling off the overall win.

Carson Dingler won the Silver medal in the PV clearing 11-11.75 and just missed with 3 attempts at 12-03.50  Look for Carson to break all records in the GHSA Pole Vault in the next 4 years down in Warner Robins at Veterans HS.

Imani Carmouche won a Bronze medal in the HJ representing the Cougar TC with a clearance of 5-03.

Alexis Jones of Smryrna TC won a Bronze medal in the Girls 800 Meters clocking a 2:16.77 and placed 8th Sunday in the 400 Meter Finals.

Jallah Galimah of the Lanier Lightning placed 4th in the Boys1500 Meter Finals in 4:18.78 and Colby Clark of Impact Athletics placed 7th in 4:19.43

Brittany Trawick from Milledgeville representing the Baldwin Blazers placed 5th in the TJ at 35-00.50